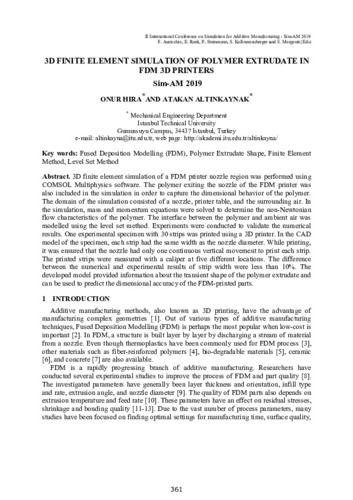 Show full item record
Hira, Onur
Altinkaynak, Atakan
Document typeConference report
PublisherCIMNE
Rights accessOpen Access
Abstract
3D finite element simulation of a FDM printer nozzle region was performed using COMSOL Multiphysics software. The polymer exiting the nozzle of the FDM printer was also included in the simulation in order to capture the dimensional behavior of the polymer. The domain of the simulation consisted of a nozzle, printer table, and the surrounding air. In the simulation, mass and momentum equations were solved to determine the non-Newtonian flow characteristics of the polymer. The interface between the polymer and ambient air was modelled using the level set method. Experiments were conducted to validate the numerical results. One experimental specimen with 30 strips was printed using a 3D printer. In the CAD model of the specimen, each strip had the same width as the nozzle diameter. While printing, it was ensured that the nozzle had only one continuous vertical movement to print each strip. The printed strips were measured with a caliper at five different locations. The difference between the numerical and experimental results of strip width were less than 10%. The developed model provided information about the transient shape of the polymer extrudate and can be used to predict the dimensional accuracy of the FDM-printed parts.
CitationHira, O.; Altinkaynak, A. 3d finite element simulation of polymer extrudate in FDM 3d printers. A: Sim-AM 2019. "Sim-AM 2019 : II International Conference on Simulation for Additive Manufacturing". CIMNE, 2019, p. 361-368. ISBN 978-84-949194-8-0.
URIhttp://hdl.handle.net/2117/334875
ISBN978-84-949194-8-0
Collections
Share: