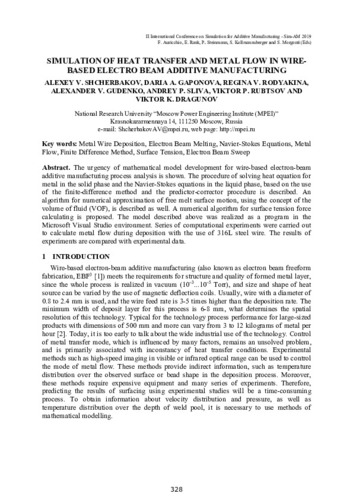 Show full item record
Shcherbakov, Alexey V.
Gaponova, Daria A.
Rodyakina, Regina V.
Gudenko, Alexander V.
Sliva, Andrey P.
Rubtsov, Viktor P.
Dragunov, Viktor K.
Document typeConference report
PublisherCIMNE
Rights accessOpen Access
All rights reserved. This work is protected by the corresponding intellectual and industrial property rights. Without prejudice to any existing legal exemptions, reproduction, distribution, public communication or transformation of this work are prohibited without permission of the copyright holder
Abstract
The urgency of mathematical model development for wire-based electron-beam additive manufacturing process analysis is shown. The procedure of solving heat equation for metal in the solid phase and the Navier-Stokes equations in the liquid phase, based on the use of the finite-difference method and the predictor-corrector procedure is described. An algorithm for numerical approximation of free melt surface motion, using the concept of the volume of fluid (VOF), is described as well. A numerical algorithm for surface tension force calculating is proposed. The model described above was realized as a program in the Microsoft Visual Studio environment. Series of computational experiments were carried out to calculate metal flow during deposition with the use of 316L steel wire. The results of experiments are compared with experimental data.
CitationShcherbakov, A.V. [et al.]. Simulation of heat transfer and metal flow in wire-based electro beam additive manufacturing. A: Sim-AM 2019. "Sim-AM 2019 : II International Conference on Simulation for Additive Manufacturing". CIMNE, 2019, p. 328-339. ISBN 978-84-949194-8-0.
URIhttp://hdl.handle.net/2117/334873
ISBN978-84-949194-8-0
Collections
Share: