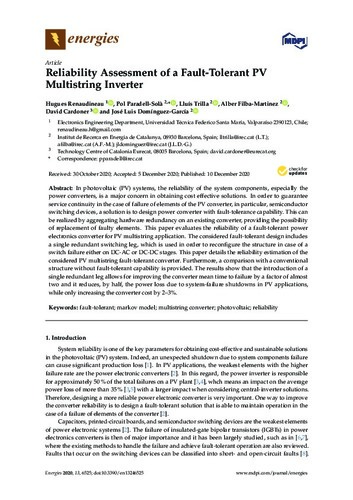 Document typeArticle
Rights accessOpen Access
Abstract
In photovoltaic (PV) systems, the reliability of the system components, especially the power converters, is a major concern in obtaining cost effective solutions. In order to guarantee service continuity in the case of failure of elements of the PV converter, in particular, semiconductor switching devices, a solution is to design power converter with fault-tolerance capability. This can be realized by aggregating hardware redundancy on an existing converter, providing the possibility of replacement of faulty elements. This paper evaluates the reliability of a fault-tolerant power electronics converter for PV multistring application. The considered fault-tolerant design includes a single redundant switching leg, which is used in order to reconfigure the structure in case of a switch failure either on DC-AC or DC-DC stages. This paper details the reliability estimation of the considered PV multistring fault-tolerant converter. Furthermore, a comparison with a conventional structure without fault-tolerant capability is provided. The results show that the introduction of a single redundant leg allows for improving the converter mean time to failure by a factor of almost two and it reduces, by half, the power loss due to system-failure shutdowns in PV applications, while only increasing the converter cost by 2–3%.
CitationRenaudineau, H. [et al.]. Reliability assessment of a fault-tolerant PV multistring inverter. "Energies", 10 Desembre 2020, vol. 13, núm. 24, p. 6525:1-6525:13.
URIhttp://hdl.handle.net/2117/334801
DOI10.3390/en13246525
ISSN1996-1073
Publisher versionhttps://www.mdpi.com/1996-1073/13/24/6525
Collections
Share: