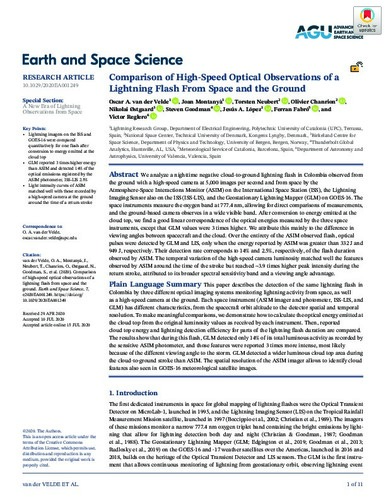 Reglero Velasco, Victor
Document typeArticle
Rights accessOpen Access
Abstract
We analyze a nighttime negative cloud-to-ground lightning flash in Colombia observed from the ground with a high-speed camera at 5,000 images per second and from space by the Atmosphere-Space Interactions Monitor (ASIM) on the International Space Station (ISS), the Lightning Imaging Sensor also on the ISS (ISS-LIS), and the Geostationary Lightning Mapper (GLM) on GOES-16. The space instruments measure the oxygen band at 777.4 nm, allowing for direct comparisons of measurements, and the ground-based camera observes in a wide visible band. After conversion to energy emitted at the cloud top, we find a good linear correspondence of the optical energies measured by the three space instruments, except that GLM values were 3 times higher. We attribute this mainly to the difference in viewing angles between spacecraft and the cloud. Over the entirety of the ASIM observed flash, optical pulses were detected by GLM and LIS, only when the energy reported by ASIM was greater than 332 J and 949 J, respectively. Their detection rate corresponds to 14% and 2.5%, respectively, of the flash duration observed by ASIM. The temporal variation of the high-speed camera luminosity matched well the features observed by ASIM around the time of the stroke but reached ~3.9 times higher peak intensity during the return stroke, attributed to its broader spectral sensitivity band and a viewing angle advantage.
CitationVan Der Velde, O. [et al.]. Comparison of high-speed optical observations of a lightning flash from space and the ground. "Earth and Space Science", Octubre 2020, vol. 7, núm. 10, p. e2020EA001249:1-e2020EA001249:11.
URIhttp://hdl.handle.net/2117/334789
DOI10.1029/2020EA001249
ISSN2333-5084
Publisher versionhttps://agupubs.onlinelibrary.wiley.com/doi/full/10.1029/2020EA001249
Other identifiershttps://doi.org/10.5281/zenodo.3872582
Collections
Share: