Analyzing the performance of a miniature 3D wind sensor for Mars 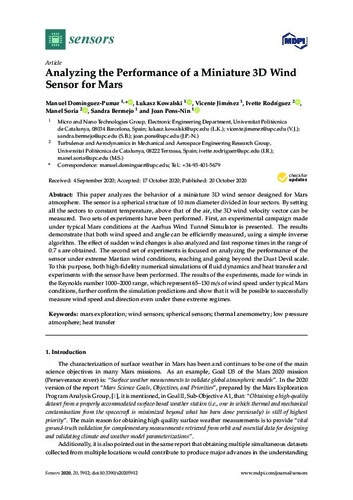 Document typeArticle
PublisherMultidisciplinary Digital Publishing Institute (MDPI)
Rights accessOpen Access
Abstract
This paper analyzes the behavior of a miniature 3D wind sensor designed for Mars atmosphere. The sensor is a spherical structure of 10 mm diameter divided in four sectors. By setting all the sectors to constant temperature, above that of the air, the 3D wind velocity vector can be measured. Two sets of experiments have been performed. First, an experimental campaign made under typical Mars conditions at the Aarhus Wind Tunnel Simulator is presented. The results demonstrate that both wind speed and angle can be efficiently measured, using a simple inverse algorithm. The effect of sudden wind changes is also analyzed and fast response times in the range of 0.7 s are obtained. The second set of experiments is focused on analyzing the performance of the sensor under extreme Martian wind conditions, reaching and going beyond the Dust Devil scale. To this purpose, both high-fidelity numerical simulations of fluid dynamics and heat transfer and experiments with the sensor have been performed. The results of the experiments, made for winds in the Reynolds number 1000–2000 range, which represent 65–130 m/s of wind speed under typical Mars conditions, further confirm the simulation predictions and show that it will be possible to successfully measure wind speed and direction even under these extreme regimes.
CitationDominguez, M. [et al.]. Analyzing the performance of a miniature 3D wind sensor for Mars. "Sensors", 20 Octubre 2020, vol. 20, núm. 20, p. 5912:1-5912:28.
URIhttp://hdl.handle.net/2117/334755
DOI10.3390/s20205912
ISSN1424-8220
Publisher versionhttps://www.mdpi.com/1424-8220/20/20/5912
Collections
Share: