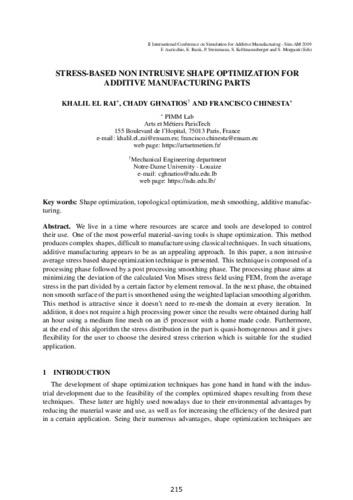 Show full item record
El Rai, Khalil
Ghnatios, Chady
Chinesta, Francisco
Document typeConference report
PublisherCIMNE
Rights accessOpen Access
Abstract
We live in a time where resources are scarce and tools are developed to control their use. One of the most powerful material-saving tools is shape optimization. This latter is a computational method in which the shape of a designed part is adapted by adding or removing material according to the environment in which this part will be used. This method produces complex shapes, difficult to manufacture using classical techniques. In such situations, additive manufacturing appears to be as an appealing approach. In this paper, a non intrusive average stress based shape optimization technique is presented. This technique is composed of a processing phase followed by a post processing smoothing phase. In the processing phase, the stresses in a certain part are calculated using finite elements analysis. Then the Von mises effective stresses are calculated and compared to the average stress in the part. The low stress elements are removed, and hence in each iteration the average stress is changing as well as the standards deviation. After several iterations, the algorithm converges and the part is ready for the post processing phase. In the next phase, the part has non smooth surface because of the element removal. Each node on the non smooth surface is detected and the concavity of the surface to which it belongs is found with respect to the topology of its environment, using a weighted Laplacian algorithm linking the selected node to its neighbors. The obtained concavity is then applied to each node. The process is repeated for several iterations until the surface is smooth as desired and the final shape is found and ready for printing. This technique has been tested on several load configurations and the obtained results were in agreement with other techniques from the open literature [1]. This method is attractive since it doesn’t need to re-mesh the domain at every iteration. In addition, it does not require a high processing power since the results were obtained during half an hour using a medium fine mesh on an i5 processor with a home made code. Furthermore, at the end of this algorithm the stress distribution in the part is quasi-homogeneous and it gives flexibility for the user to choose the desired stress criterion which suitable for the studied application.
CitationEl Rai, K.; Ghnatios, C.; Chinesta, F. Stress-based non intrusive shape optimization for additive manufacturing parts. A: Sim-AM 2019. "Sim-AM 2019 : II International Conference on Simulation for Additive Manufacturing". CIMNE, 2019, p. 215-224. ISBN 978-84-949194-8-0.
URIhttp://hdl.handle.net/2117/334614
ISBN978-84-949194-8-0
Collections
Share: