Strain hardening behavior in an AA6060-T6 alloy processed by ECAP 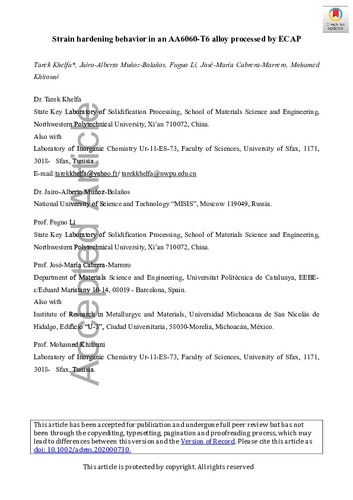 Except where otherwise noted, content on this work is licensed under a Creative Commons license : Attribution-NonCommercial-NoDerivs 3.0 Spain
Abstract
Strain hardening is a useful mechanism for improving mechanical properties in materials. This study investigates the strain-hardening behavior of an AA6060 alloy processed by equal channel angular pressing (ECAP) up to 12 passes. Analysis by electron backscattered diffraction (EBSD) shows that the average geometrically necessary dislocations (GNDs) density increases continually up to the fourth pass and then saturates at a value of ˜1.85¿×¿1014¿m-2. Hollomon and Kocks–Mecking–Estrin (KME) analysis are used to investigate the strain-hardening behavior of the resulting ultrafine-grained alloy. Results indicate that the strain-hardening capacity (HC) and the strain-hardening exponent (n) of all deformed specimens are lower in comparison with the as-received condition. Moreover, the strain-hardening rate fluctuates with the ECAP passes. First, it increases from the first ECAP pass up to the fourth pass, then diminishes up to the fifth pass, and finally, it increases again with further deformation. The difference in the strain-hardening behavior of the ECAPed AA6060 is examined in terms of the grain size effect. It is shown that the strain-hardening curves change notably with diminishing the grain size. In addition, the KME model is used to depict the storage and annihilation of dislocations in the ECAPed specimens.
CitationKhelfa, T. [et al.]. Strain hardening behavior in an AA6060-T6 alloy processed by ECAP. "Advanced engineering materials", Setembre 2020, p. 2000730:1-2000730:11.
URIhttp://hdl.handle.net/2117/334463
DOI10.1002/adem.202000730
ISSN1438-1656
Publisher versionhttps://onlinelibrary.wiley.com/doi/abs/10.1002/adem.202000730
Collections
Share: