Models for cascade failures in complex networks and systems. 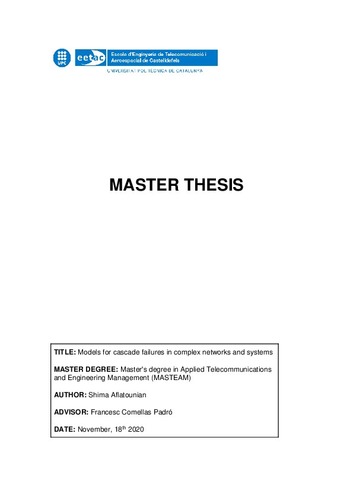 Document typeMaster thesis
Rights accessOpen Access
Abstract
Given the complexity, size, cost, and importance of network infrastructures like the internet, telecommunication, transportation, and social networks, it is not surprising the attention that research on network analysis and protection is receiving. Today¿s world of technological advances creates high expectations in all those areas that humans and computers can manage. Thus, in the context of network science, we expect networks to keep their performance and be adaptative and resilient to diverse circumstances. As all networks are subject to attacks and collapse, safety protocols should be designed to provide tools to mitigate possible network failures. Many networks suffer attacks periodically: Twitter, Amazon, eBay have experienced denial-of-service for hours and even days, power grids have undergone massive blackouts, and similar incidents have happened for many other real networks. The failure usually propagates from one component to another in a cascade manner, known as cascade failure. Cascading failure studies investigate potential solutions to make networks more robust. There are some vital nodes within each network that have a profound influence on cascading phenomena. In this TFM, giving focus to cascade failure analysis, we explore several network structural properties that might impact the network performance when it is under attack, in particular k-core measure. Moreover, a recently proposed deterministic hierarchical graph family, which appears to be a good model for real networks, has been examined under attacks along with some other graph models. By comparing their relative performance, we can assess if this network can be a model to improve future network designs. Our findings show that networks with a high minimum k-core and negative degree-degree correlation (disassortative) perform better under attacks than assortative networks with low minimum k-core. To enhance the robustness of existing networks, we can modify them in a way to have less assortativity and such that their minimum k-core value is increased by about 1-core to 2-core. Regarding the deterministic hierarchical graph family, by considering a simple control strategy along with an 18% extra load capacity for each component, the network would be a proper choice for future network design since it can handle all attacks, according to the standard established model considered in this TFM.
SubjectsComputer network protocols, Grafs, Teoria de, Sistemes complexos
URIhttp://hdl.handle.net/2117/334399
Collections
Share: