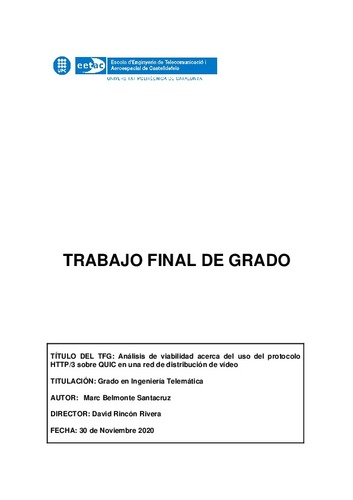 Document typeBachelor thesis
Rights accessOpen Access
Abstract
The main purposes of the companies involved in offering multimedia services over the Internet, following the OTT or IPTV model, are the constant research to improve the quality of user experience, to save resources when transporting content and to improve efficiency. The networks that take care of this are called CDNs (Content Delivery Network). This project consists on the study of the implementation of new protocols in charge of transporting the information in this type of network, those already mentioned above, CDNs, to the end user. The first of these protocols is QUIC, a new transport protocol in the process of standardization. Then, in the application layer, is the new version of the application protocol HTTP called HTTP/3. With all of that, the objective will be to observe the QoE (Quality of Experience) benefits that a user could get when these promising tecnologies are in action. The main target of the project is to analyze the behavior of these technologies by altering the characteristics of the network and study the quality that would reach to the user who is consuming the content (In this case it would correspond to a VoD (Video on Demand) service). In order to do this, a server hosted in an instance of a cloud computing provider has been built, on which Nginx has been installed as a service and has been adapted to be able to carry out communications through QUIC and HTTP/3. On the user side, a terminal-based DASH player has been adapted, without a graphical interface, capable of performing HTTP/3 requests. The tests have been carried out adding different simulated situations in the network. While downloading and playing video content from the server, we have proceeded to experiment by adding delay, jitter or losses in the different tests, and finally, all the phenomena were mixed simultaneously. Meanwhile, in the video player different information was collected which eventually helped demonstrate that QUIC and HTTP / 3 are a viable technology to transmit content over the Internet, offering acceptable quality standards to the consumer.
SubjectsComputer network protocols, Protocols de xarxes d'ordinadors
URIhttp://hdl.handle.net/2117/334397
Collections
Share: