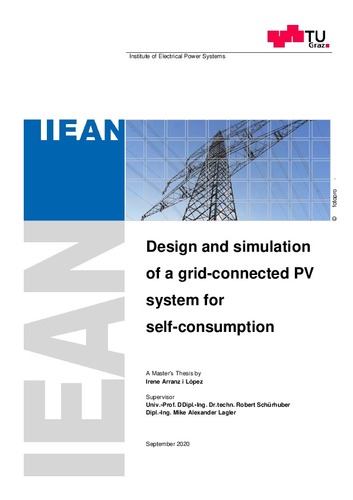 Except where otherwise noted, content on this work is licensed under a Creative Commons license : Attribution-NonCommercial-NoDerivs 3.0 Spain
Abstract
Although Spain is one of the countries with the highest incidence of solar irradiance in Europe, in many areas of the country PV technology is not fully deployed. This thesis is focused on designing and assessing through a simulation software the performance of a grid-connected PV system for selfconsumption installed on a building’s rooftop in a location with a high solar potential unused. An in-depth search on photovoltaic literature was made in order to gain information on the field, as well as on the grid code requirements in both Europe and Spain. Then, a prospection to find the proper location for the installation was done. Afterwards, a load profile was created to know the building’s energy demand, and finally the technology to implement was chosen and sized. With these premises, a CAD 3D model of the building and surrounding elements was implemented into a simulation software (PVsyst). This allowed to create the PV layout, to find the most accurate values for the parameters to optimize the performance of the system (tilt angle, azimuth, and row spacing), and to develop a shading and loss analysis. The first scenarios were further refined with an additional simulation which took into account a storage system, providing a final scenario. Finally, an economic study was performed. The system renders an annual energy production of 20,38 MWh/year, an annual specific yield of 1.742 kWh/kWp with a performance ratio of 79,3%, which cover the household’s demand with an estimate saving of 2.635,8 €/a and 3409 tCO2/a emitted to the atmosphere. The study showed the system to be effective and economically viable and profitable, and also provides a design guide for grid-connected PV systems for self-consumption.
SubjectsPhotovoltaic power generation, Energy development, Energia solar fotovoltaica, Energia -- Desenvolupament
DegreeMÀSTER UNIVERSITARI EN ENGINYERIA INDUSTRIAL (Pla 2014)
Location
1: Sol, 28013 Madrid, Espanya
URIhttp://hdl.handle.net/2117/334228
Collections
Share: