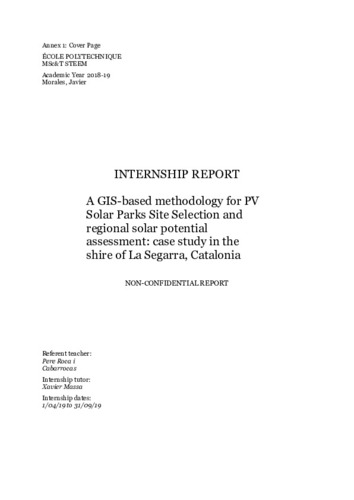 CovenanteeÉcole Polytechnique Paris
Document typeMaster thesis
Rights accessOpen Access
Abstract
Transitioning to a society with almost null fossil fuel usage based on an alternative energetic model not dependent on fossil fuels nor nuclear power and based on decentralized energy system 100% renewable based with own resources by 2050 is a quite ambitious objective for Catalonia specially taking into account that renewables barely represented a 5% of total primary energy and a weak 8,5% of final brute energy in Catalonia in 2017. Nuclear centrals decommissioning is forecasted for 2027 but fulfilling such objective would require an equivalent solar capacity addition of around 7-times as much solar PV capacity as there is in place today, every year, for the following 8 years. The Spanish transition to renewable energies is being based on concentrating generation in fewer but bigger installations. However, a centralized model based on big installations would not be successful is Catalonia where land availability is scarce and geographic characteristics make it difficult for megaprojects to be developed. Therefore, this project will be centered in defining and applying a GIS-based methodology to conduct regional solar PV potential assessments aimed at siting small-medium solar parks (1-20 MW) within the Catalan territory. The methodology will be tested in the Catalan region of La Segarra using a two-stage framework approach. On a first stage, areas restricted for solar parks’ development will be discarded according to pre-defined constraints to obtain a rough solar regional potential. On a second stage, several criteria as solar radiation, topography or accessibility considerations will be used to screen remaining lands and identify most optimal areas for solar parks’ development. Results obtained in the study case of La Segarra have shown that if all optimal potential would be used in the region would be used, total generation would be of 3.231 GWh (7,1% of Catalan electricity consumption) whereas in the rough potential scenario it would be of 19.400 GWh (42,6% of Catalan electricity consumption) requiring, however, the occupation of a quarter of the total regional surface (clearly not feasible). The greatest density of potential is to be found at the eastern areas of the region.
SubjectsPhotovoltaic power generation, Solar power plants, Energia solar fotovoltaica, Centrals solars
DegreeMÀSTER UNIVERSITARI EN ENGINYERIA DE L'ENERGIA (Pla 2013)
Location
1: Avinguda de Catalunya, 84, 25200 Cervera, Lleida, Espanya
URIhttp://hdl.handle.net/2117/334172
Collections
Share: