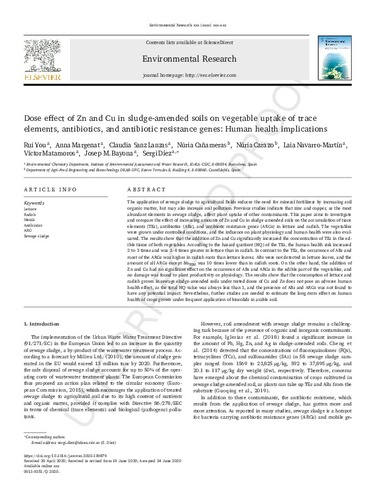 Except where otherwise noted, content on this work is licensed under a Creative Commons license : Attribution-NonCommercial-NoDerivs 3.0 Spain
ProjectDINAMICA DE LA ACUMULACION DE ANTIBIOTICOS, METALES Y GENES DE RESISTENCIA BACTERIANA EN CULTIVOS AGRICOLAS POR FERTILIZACION ORGANICA. IMPLICACIONES EN LA PRODUCCION VEGETAL (AEI-AGL2017-89518-R)
Abstract
The application of sewage sludge to agricultural fields reduces the need for mineral fertilizers by increasing soil organic matter, but may also increase soil pollution. Previous studies indicate that zinc and copper, as the most abundant elements in sewage sludge, affect plant uptake of other contaminants. This paper aims to investigate and compare the effect of increasing amounts of Zn and Cu in sludge-amended soils on the accumulation of trace elements (TEs), antibiotics (ABs), and antibiotic resistance genes (ARGs) in lettuce and radish. The vegetables were grown under controlled conditions, and the influence on plant physiology and human health were also evaluated. The results show that the addition of Zn and Cu significantly increased the concentration of TEs in the edible tissue of both vegetables. According to the hazard quotient (HQ) of the TEs, the human health risk increased 2 to 3 times and was 3–4 times greater in lettuce than in radish. In contrast to the TEs, the occurrence of ABs and most of the ARGs was higher in radish roots than lettuce leaves. ABs were not detected in lettuce leaves, and the amount of all ARGs except blaTEM was 10 times lower than in radish roots. On the other hand, the addition of Zn and Cu had no significant effect on the occurrence of ABs and ARGs in the edible part of the vegetables, and no damage was found to plant productivity or physiology. The results show that the consumption of lettuce and radish grown in sewage-sludge-amended soils under tested doses of Cu and Zn does not pose an adverse human health effect, as the total HQ value was always less than 1, and the presence of ABs and ARGs was not found to have any potential impact. Nevertheless, further studies are needed to estimate the long-term effect on human health of crops grown under frequent application of biosolids in arable soil
CitationYou, R. [et al.]. Dose effect of Zn and Cu in sludge-amended soils on vegetable uptake of trace elements, antibiotics, and antibiotic resistance genes: Human health implications. "Environmental research", Desembre 2020, vol. 191, p. 1-10.
URIhttp://hdl.handle.net/2117/334166
DOI10.1016/j.envres.2020.109879
ISSN0013-9351
Publisher versionhttps://www.sciencedirect.com/science/article/abs/pii/S001393512030774X
Collections
Share: