Català Roca: a visionary of the urban landscape's evolution 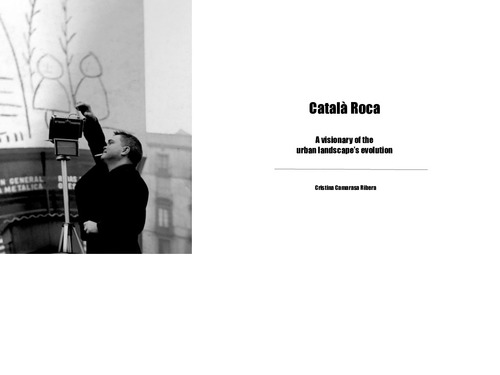 Document typeBachelor thesis
Rights accessOpen Access
Abstract
Francesc Català Roca is one of the most outstanding photographers of the 20th century. Much of his work collects urban images with an innovative look that perfectly combines aesthetics and reality. Barcelona is his favorite scenery and his photos, endowed with a great narrative quality, describe the atmosphere that was breathed in its streets several decades ago. Lights and shadows, reflections, and peculiar characters. When asked why he had devoted himself to photography, he replied: “I realized that I was witness of things that would quickly disappear , I sensed it; five years later I would not have been able to take these photographs”. Hearing this statement, I wonder if architecture and the urban landscape have had such a “fleeting” presence as he anticipated. In order to find the answer, this research work studies the urban landscape’s evolution of the most heritage area of the Ciutat Vella district of Barcelona, the area where Català Roca lived his childhood and where he began to experiment with photography. The analysis focuses on six of his photographs from the 1940s, 1950s and 1960s that show iconic public spaces that have adapted over time to the needs of society in each era. With a clear evolution towards the opening and oxygenation of a neighborhood with such urban density, current projects and new proposals such as those of La Rambla or Via Laietana seem to fight against the great threat of the city that Català Roca already sensed seventy years ago , the car.
SubjectsCatalà Roca, Francesc, Photographs -- Spain, Architectural photography -- Spain -- Barcelona, Barcelona (Spain) -- Photographs, Ciutat Vella (Barcelona, Spain) -- Photographs, Català-Roca, Francesc, 1922-1998, Fotògrafs -- Catalunya, Fotografia arquitectònica -- Catalunya -- Barcelona, Barcelona (Catalunya) -- Fotografies, Ciutat Vella (Barcelona, Catalunya) -- Fotografies
DegreeGRAU EN ESTUDIS D'ARQUITECTURA (Pla 2014)
Location
1: Carrer de les Cabres, 15, 08001 Barcelona, Espanya
2: Carrer de la Palla, 37, 08002 Barcelona, Espanya
3: Plaça Nova, 5, 08002 Barcelona, Espanya
4: Av. de la Catedral, 7, 08002 Barcelona, Espanya
5: Via Laietana, 33, 08003 Barcelona, Espanya
6: Pl. de Ramon Berenguer el Gran, 3, 08002 Barcelona, Espanya
URIhttp://hdl.handle.net/2117/334142
Collections
Share: