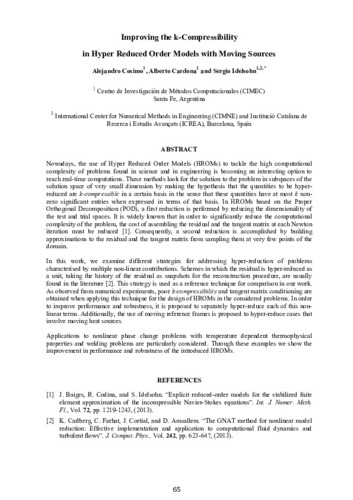 Show full item record
Cosimo, Alejandro
Cardona, Alberto
Idelsohn, Sergio
Document typeConference report
PublisherCIMNE
Rights accessOpen Access
Abstract
Nowadays, the use of Hyper Reduced Order Models (HROMs) to tackle the high computational complexity of problems found in science and in engineering is becoming an interesting option to reach real-time computations. These methods look for the solution to the problem in subspaces of the solution space of very small dimension by making the hypothesis that the quantities to be hyper-reduced are k-compressible in a certain basis in the sense that these quantities have at most k non-zero significant entries when expressed in terms of that basis. In HROMs based on the Proper Orthogonal Decomposition (POD), a first reduction is performed by reducing the dimensionality of the test and trial spaces. It is widely known that in order to significantly reduce the computational complexity of the problem, the cost of assembling the residual and the tangent matrix at each Newton iteration must be reduced [1]. Consequently, a second reduction is accomplished by building approximations to the residual and the tangent matrix from sampling them at very few points of the domain. In this work, we examine different strategies for addressing hyper-reduction of problems characterised by multiple non-linear contributions. Schemes in which the residual is hyper-reduced as a unit, taking the history of the residual as snapshots for the reconstruction procedure, are usually found in the literature [2]. This strategy is used as a reference technique for comparison in our work. As observed from numerical experiments, poor k-compressibility and tangent matrix conditioning are obtained when applying this technique for the design of HROMs in the considered problems. In order to improve performance and robustness, it is proposed to separately hyper-reduce each of this non-linear terms. Additionally, the use of moving reference frames is proposed to hyper-reduce cases that involve moving heat sources. Applications to nonlinear phase change problems with temperature dependent thermophysical properties and welding problems are particularly considered. Through these examples we show the improvement in performance and robustness of the introduced HROMs.
CitationCosimo, A.; Cardona, A.; Idelsohn, S. Improving the k-compressibility in hyper reduced order models with moving sources. A: ADMOS 2015. CIMNE, 2015, p. 65.
URIhttp://hdl.handle.net/2117/333913
Collections
Share: