Overview on sustainable aviation technologies and guidelines for its application 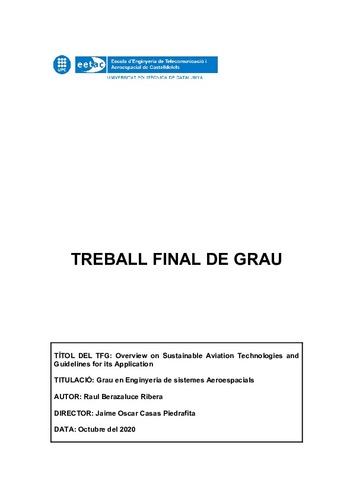 gmail.com
Tutor / directorCasas Piedrafita, Oscar
Document typeBachelor thesis
Rights accessOpen Access
Abstract
Although aviation is arguably the most efficient it has ever been, it is to blame for the 2% to 3% of global greenhouse gas (GHG) emissions. In contrast to other sectors, switching to electric energy, is not a straightforward procedure. The energy density of batteries is only a fraction of that in fossil fuel, and weight plays a crucial role in aviation. This presents a challenge that the aviation industry is tackling in creative ways. This project studies different topics the author considered to fit the scale of the project and of the available resources. And that would have the greatest impact on the industry from an environmental standpoint. The first goal is to quantify the inefficiency of the aircraft in the European airspace. As seen in the project, there are two main sources of inefficiency, although, the root of said inefficiencies is the same: Operation of the aircraft outside their ideal efficiency area. This can happen either because an airplane has been modified to carry less passengers (pax) or because it is operating outside their efficient range. Both cases result in unnecessary fuel burn and should be avoided. The proposed solution is the implementation of aircraft better suited for those roles and routes in which present day aircraft are inefficient. The second objective focuses on ground operation. Turbofan engines are very efficient during the cruise phase. This does, however, have an impact on their ground operation. For instance, the proportional generation of certain GHGs is considerably higher at this stage, acoustic pollution is produced, and the operative span of the engines gets shorter. Also, massive amounts of fuel burn during these phases. A solution in which some companies are working on is auxiliary taxi and pushback systems that keep the engines shut on ground. The last objective is to study and explain the modification of simple aircraft (light, single engine), with a conventional, internal combustion powerplant to an electric one. The main issue with electric conversion in larger, commercial aircraft is the limited range. Range plays a crucial role in the commercial aviation industry because it determines which routes an airline make profit of. However, small aircraft are not as subject to range. In fact, many missions carried out by small aircraft such as surveillance of natural areas, pilot training, or touristic flights, do not need long range aircraft. Thus, given the low operational cost of an electric aircraft, small aircraft owners may consider converting theirs to an electric aircraft.
SubjectsRenewable energy resources., Aviació -- Aspectes ambientals -- Espanya
DegreeGRAU EN ENGINYERIA DE SISTEMES AEROESPACIALS (Pla 2015)
URIhttp://hdl.handle.net/2117/333863
Collections
Share: