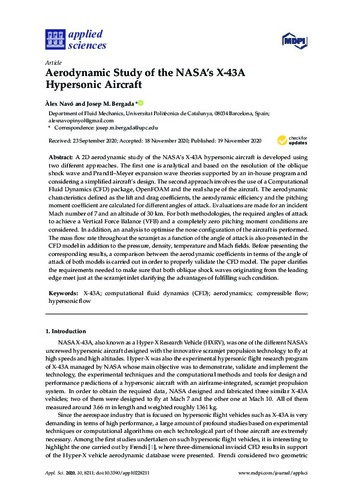 Document typeArticle
PublisherMultidisciplinary Digital Publishing Institute
Rights accessOpen Access
Abstract
A 2D aerodynamic study of the NASA’s X-43A hypersonic aircraft is developed using two different approaches. The first one is analytical and based on the resolution of the oblique shock wave and Prandtl–Meyer expansion wave theories supported by an in-house program and considering a simplified aircraft’s design. The second approach involves the use of a Computational Fluid Dynamics (CFD) package, OpenFOAM and the real shape of the aircraft. The aerodynamic characteristics defined as the lift and drag coefficients, the aerodynamic efficiency and the pitching moment coefficient are calculated for different angles of attack. Evaluations are made for an incident Mach number of 7 and an altitude of 30 km. For both methodologies, the required angles of attack to achieve a Vertical Force Balance (VFB) and a completely zero pitching moment conditions are considered. In addition, an analysis to optimise the nose configuration of the aircraft is performed. The mass flow rate throughout the scramjet as a function of the angle of attack is also presented in the CFD model in addition to the pressure, density, temperature and Mach fields. Before presenting the corresponding results, a comparison between the aerodynamic coefficients in terms of the angle of attack of both models is carried out in order to properly validate the CFD model. The paper clarifies the requirements needed to make sure that both oblique shock waves originating from the leading edge meet just at the scramjet inlet clarifying the advantages of fulfilling such condition
CitationNavó, A.; Bergadà, J.M. Aerodynamic study of the NASA's X-43A hypersonic aircraft. "Applied sciences", 19 Novembre 2020, vol. 10, núm. 22, p. 8211:1-8211:23.
URIhttp://hdl.handle.net/2117/333858
DOI10.3390/app10228211
ISSN2076-3417
Publisher versionhttps://www.mdpi.com/2076-3417/10/22/8211
Collections
Share: