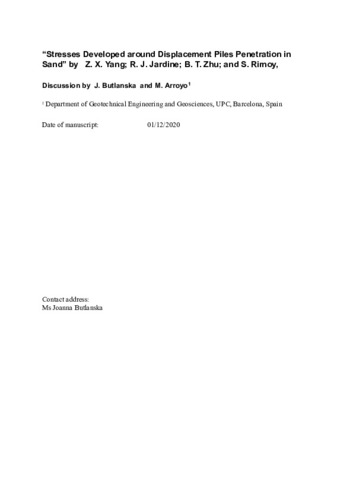 Document typeArticle
Rights accessOpen Access
All rights reserved. This work is protected by the corresponding intellectual and industrial property rights. Without prejudice to any existing legal exemptions, reproduction, distribution, public communication or transformation of this work are prohibited without permission of the copyright holder
Abstract
The authors deserve praise for gathering together many different strands of evidence that clarify the mechanics of pile penetration in sand. In their review of numerical approaches to the problem, they correctly indicate, citing work by Arroyo et al. (2011), that simulations based on the discrete-element method (DEM) have offered quantitative agreement with measurements of tip resistance in calibration chambers. They go on to note that “DEM analyses of the surrounding stress field remains limited by the number of particles that can be considered.” The purpose of this discussion is to show that such limitation of DEM models is not as strong an impediment to obtaining meaningful stress fields as the authors may have feared. Butlanska et al. (2014) performed DEM analysis of a cone penetration test (CPT) in a virtual calibration chamber (VCC). Their analysis was performed at three scales, i.e., macroscale, mesoscale, and microscale. Some of the results they presented are subsequently reanalyzed and extended.
Description
This material may be downloaded for personal use only. Any other use requires prior permission of the American Society of Civil Engineers. This material may be found at https://ascelibrary.org/doi/10.1061/%28ASCE%29GT.1943-5606.0001212.
CitationButlanska, J.; Arroyo, M. Discussion of «Stresses developed around displacement piles penetration in sand» by Z. X. Yang, R. J. Jardine, B. T. Zhu, and S. Rimoy. "Journal of geotechnical and geoenvironmental engineering", Març 2015, vol. 141, núm. 3, p. 07014037:1-07014037:3.
URIhttp://hdl.handle.net/2117/333783
DOI10.1061/(ASCE)GT.1943-5606.0001022
ISSN1090-0241
Publisher versionhttp://ascelibrary.org/doi/abs/10.1061/%28ASCE%29GT.1943-5606.0001212
Collections
Share: