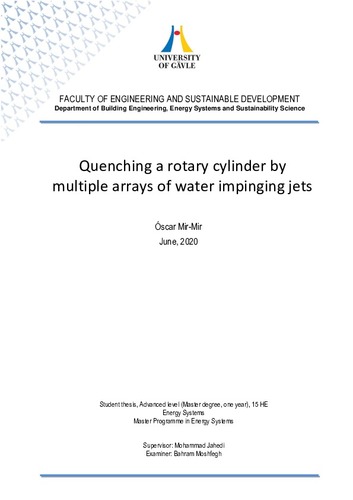 ; Jahedi, Mohammad
CovenanteeHögskolan i Gävle
Document typeMaster thesis
Rights accessOpen Access
Abstract
A rotating steel cylinder has been heated up to 600ºC in order to be the cooled down seconds later so that desired material properties are obtained or improved. This process is done by the innovative method of multiple water impinging jets. The aim of this project is to develop a better understanding of the advantages of the multiple water impinging jets quenching method and its flexibility to control the cooling rate. The experimental process has been measured and monitored with measurement instruments such as embedded thermocouples, DAQ system and LabVIEW program. In this way, the curve of temperature drop vs time (among others) has been drawn and analyzed. Numerous tests, focused in different parameters of impinging jets setup, have been carried out in order to study the boiling heat transfer and achieve an optimized cooling setup by water impinging jets technique. Jet’s flow rate was varied between 5.6 and 16.7 l/min, as well as cylinder rotation speed (10 - 50 rpm), initial quenching temperature (300 – 600 ºC), jet-to-jet spacing in the jets configuration (S/d = 4 and 6) and the configuration of multiple array of nozzles (staggered and in-line). The results showed that higher cooling rates are obtained by higher jet’s flow rate, but higher temperature difference was also created in material from center to outer point during cooling process. Higher initial temperature resulted in higher cooling rate in onset of quenching. Results revealed that the footprint caused by rotation speed was captured only in very low rotation speed, creating a cyclic oscillation in the temperature history at the beginning of the quenching process. In comparison of multiple arrays, lower cooling rate was obtained in the fountain points between neighbor jets in the in-line array than in the staggered. More uniform cooling rate was found in the footprint of cooling rate in 3-D counter plot in staggered array. Higher cooling rate was achieved with larger jet-to-jet spacing (S/d), but less uniform cooling rate over the area compare to S/d = 4 in staggered pattern.
SubjectsHydraulics--Equipment and instruments, Hidràulica -- Aparells i instruments
DegreeMÀSTER UNIVERSITARI EN ENGINYERIA INDUSTRIAL (Pla 2014)
URIhttp://hdl.handle.net/2117/333628
Collections
Share: