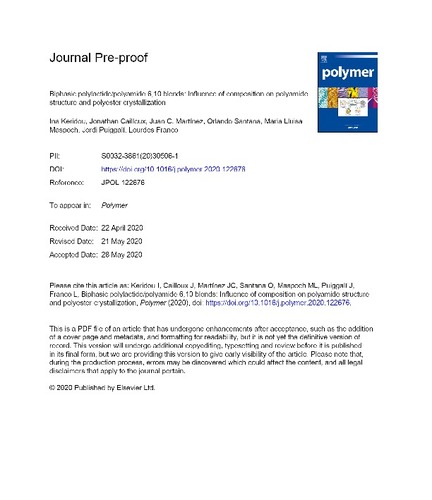 Except where otherwise noted, content on this work is licensed under a Creative Commons license : Attribution-NonCommercial-NoDerivs 3.0 Spain
Abstract
Blends with different ratios of polylactide and polyamide 6,10 (PA610) have been prepared by melt-mixing using a Brabender mixer equipment. Previously, a rheologically modified polylactide (PLAREx) was obtained through reactive extrusion using a multifunctional epoxide agent. It was expected that unreacted epoxy groups of PLAREx were able to improve the compatibility between the two polymers. SEM observations revealed a logical dependence of the morphology of immiscible phases with composition, and more interestingly a co-continuity at relatively low PA content (around 50%) was detected. This result contrasts with previous observations performed with non-modified PLA. Confined PA domains increased with the PA content and hardly crystallized at the typical crystallization temperature of the pure PA (195 °C). Synchrotron X-ray diffraction studies indicated that a PA crystallization at a lower temperature close to 120 °C was enhanced and led to a pseudohexagonal ¿ phase that differs from the characteristic layered structure of PA610. SAXS data revealed also that well differentiated lamellar entities could be assigned at both immiscible polymer phases. Clear differences were observed in the spherulitic morphologies attained under isothermal melt crystallization experiments. Results indicated that the texture of PLAREx spherulites was modified by the presence of PA. Compatibilization of PA molecules on the crystal lamellar boundaries of PLAREx led to an enhancement of the lamellar twisting frequency. Optical microscopy results also indicated that the crystal growth rate of PLAREx increased by the incorporation of PA, but in contrast this had an adverse effect on the nucleation process
CitationKeridou, I. [et al.]. Biphasic polylactide/polyamide 6,10 blends: Influence of composition on polyamide structure and polyester crystallization. "Polymer", 12 Agost 2020, vol. 202, p. 122676/1-122676/11.
URIhttp://hdl.handle.net/2117/333554
DOI10.1016/j.polymer.2020.122676
ISSN0032-3861
Publisher versionhttps://www.sciencedirect.com/science/article/abs/pii/S0032386120305061
Collections
Share: