Solvation dynamics in water: 4: on the initial regime of solvation relaxation 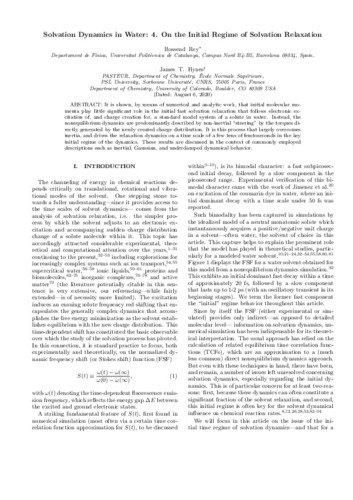 Except where otherwise noted, content on this work is licensed under a Creative Commons license : Attribution-NonCommercial-NoDerivs 3.0 Spain
Abstract
It is shown, by means of numerical and analytic work, that initial molecular momenta play little significant role in the initial fast solvation relaxation that follows electronic excitation of, and charge creation for, a standard model system of a solute in water. Instead, the nonequilibrium dynamics are predominantly described by noninertial “steering” by the torques directly generated by the newly created charge distribution. It is this process that largely overcomes inertia and drives the relaxation dynamics on a time scale of a few tens of femtoseconds in the key initial regime of the dynamics. These results are discussed in the context of commonly employed descriptions such as inertial, Gaussian, and underdamped dynamical behavior.
CitationRey, R.; Hynes, J. Solvation dynamics in water: 4: on the initial regime of solvation relaxation. "The journal of physical chemistry. B", 3 Setembre 2020, vol. 124, núm. 35, p. 7668-7681.
URIhttp://hdl.handle.net/2117/333534
DOI10.1021/acs.jpcb.0c05706
ISSN1520-5207
Publisher versionhttps://pubs.acs.org/doi/10.1021/acs.jpcb.0c05706
Collections
Share: