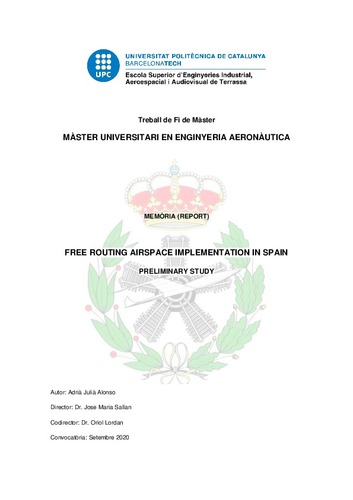 Document typeMaster thesis
Rights accessOpen Access
Abstract
The present study aims to assess the actual performance of flight operations in the Spanish airspace and evaluate the possible deployment of the Free Routing Airspace concept in order to optimize air traffic routes, according to SESAR expectations. Free Routing is an operational concept that foresees the air navigation within an airspace unconstrained by the current existing air routes and fixed points. That will allow airspace users to perform more efficient routes according to their preferences and, consequently, reduce fuel consumptions and delays. Although, free routing implementation requires a set of operational and technical changes in all the actors involved in order to ensure a safe transition from the actual procedures, especially in the regions with high volumes of traffic or complex situations regarding Air Traffic Control.Taking in consideration the characteristics of Spanish airspace and the degree of maturity of the upcoming free routing, which implementation is still on course in several European countries, this study is focused on the En-Route airspace, excluding of its scope Terminal Areas where, due to the complexity of air operations and their individual particularities, a more detailed and constrained approach should be adopted.The first sections of the study describe the current state of the air navigation in Europe and the effort, research and measures adopted regarding Free Routing. Aiming to clarify the technical background to the general public, general air navigation concepts and FRA specific definitions are included.Then, a revision of European and Spanish airspace is performed, including traffic performance statistics and the description of the Spanish particular air structure, mentioning the regulatory framework and responsible bodies.The study is completed with a traffic simulation performed with real flight data, from where safety and efficiency in Spain are evaluated through key parameters. Within this process, a general analysis of the Spanish availability to implement Free Routing operations is made and treated as a Case Study, describing the rationale followed and the data processing. Main results and recommendations derived from the simulation are stated at the end of the study, including overall conclusions and further steps to be taken in order to ensure a proper development of Free Routing in Spain. In this thesis, only commercial aviation will be considered, as it is the most important aviation segment concerning long flights and more susceptible to perceive the benefits from a Free Routing Airspace implementation
SubjectsAirspace (International law), Navigation (Aeronautics), Airways, Espai aeri (Dret internacional), Navegació aèria, Aerovies
DegreeMÀSTER UNIVERSITARI EN ENGINYERIA AERONÀUTICA (Pla 2014)
URIhttp://hdl.handle.net/2117/333379
Collections
Share: