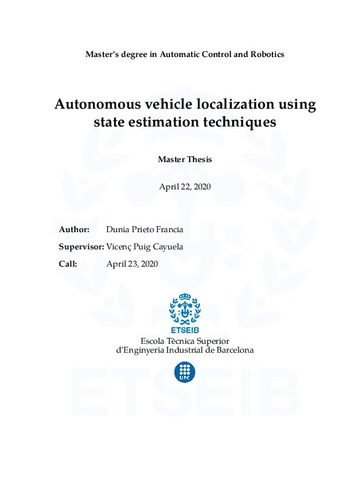 Document typeMaster thesis
Rights accessOpen Access
Abstract
Recently, industrialized countries carry out a technological race towards autonomous driving. The current commercial driver assistant systems are limited to aiding the driver while the driver is responsible for overall control of the vehicle or some autonomous driving functions under certain driving conditions. There are still many challenges to be solved to allow autonomous vehicles to emerge into the market. One of the key challenges for the development of fully autonomous vehicles is localizing the vehicle in known, unknown, or uncertain environments. Most of the existing works in the field of mobile robotics rely on a non-linear kinematic motion model under the assumption that the velocity is low. However, in autonomous vehicle applications where the velocity is higher, a dynamic model is required. On the other hand, conventional solutions are based on Extended Kalman filter that performs a linearization around the estimated trajectory. Within this context, this master thesis has considered a non-linear kinematic/dynamic motion model. Furthermore, the use of an LPV Kalman filter for estimating the vehicle dynamic state has been explored. Due to the philosophy underlying the design procedure, computational complexity is reduced and strong non-linearities are easier to handle. Kinematic states are obtained by means of numerical integration. The proposed approach has been implemented and integrated in an SLAM Toolbox for Matlab. Simulations results validate the developed localization technique. However, the results still show space for improvement. In particular, a better integration between the kinematic and dynamic parts should be developed. This can be achieved by designing an observer that integrates both the dynamic and kinematic parts. Another extension that is planned is the inclusion of landmarks in the LPV Kalman observer and the map building capability. Reaching autonomous driving it just a matter of time!!!
SubjectsAutonomous vehicles, Vehicles autònoms
URIhttp://hdl.handle.net/2117/333272
Collections
Share: