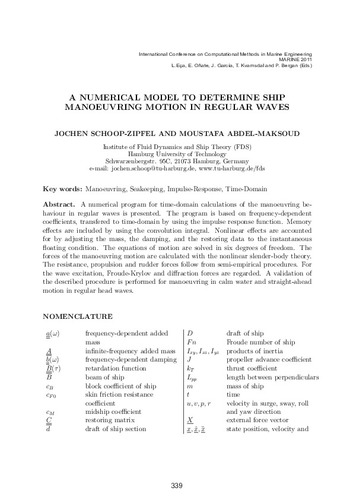 Show full item record
Schooo-Zipfel, Jochen
Abdel-Maksoud, Moustafa
Document typeConference report
PublisherCIMNE
Rights accessOpen Access
All rights reserved. This work is protected by the corresponding intellectual and industrial property rights. Without prejudice to any existing legal exemptions, reproduction, distribution, public communication or transformation of this work are prohibited without permission of the copyright holder
Abstract
A numerical program for time-domain calculations of the manoeuvring behaviour in regular waves is presented. The program is based on frequency-dependent coefficients, transfered to time-domain by using the impulse response function. Memory effects are included by using the convolution integral. Nonlinear effects are accounted for by adjusting the mass, the damping, and the restoring data to the instantaneous floating condition. The equations of motion are solved in six degrees of freedom. The forces of the manoeuvring motion are calculated with the nonlinear slender-body theory. The resistance, propulsion and rudder forces follow from semi-empirical procedures. For the wave excitation, Froude-Krylov and diffraction forces are regarded. A validation of the described procedure is performed for manoeuvring in calm water and straight-ahead motion in regular head waves.
CitationSchooo-Zipfel, J.; Abdel-Maksoud, M. A numerical model to determine ship manoeuvring motion in regular waves. A: . CIMNE, 2011, p. 339-350.
URIhttp://hdl.handle.net/2117/333243
Collections
Share: