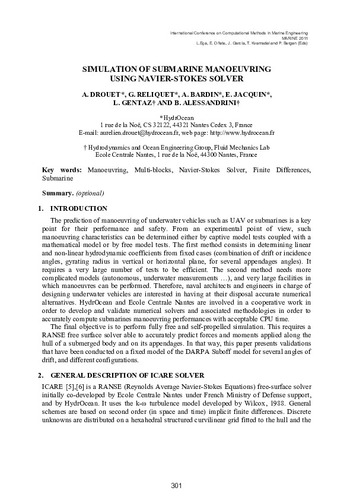 Show full item record
Drouet, A.
Reliquet, G.
Bardin, A.
Jacquin, E.
Gentaz, L.
Alessandrini, B.
Document typeConference report
PublisherCIMNE
Rights accessOpen Access
All rights reserved. This work is protected by the corresponding intellectual and industrial property rights. Without prejudice to any existing legal exemptions, reproduction, distribution, public communication or transformation of this work are prohibited without permission of the copyright holder
Abstract
The prediction of manoeuvring of underwater vehicles such as UAV or submarines is a key point for their performance and safety. From an experimental point of view, such manoeuvring characteristics can be determined either by captive model tests coupled with a mathematical model or by free model tests. The first method consists in determining linear and non-linear hydrodynamic coefficients from fixed cases (combination of drift or incidence angles, gyrating radius in vertical or horizontal plane, for several appendages angles). It requires a very large number of tests to be efficient. The second method needs more complicated models (autonomous, underwater measurements …), and very large facilities in which manoeuvres can be performed. Therefore, naval architects and engineers in charge of designing underwater vehicles are interested in having at their disposal accurate numerical alternatives. HydrOcean and Ecole Centrale Nantes are involved in a cooperative work in order to develop and validate numerical solvers and associated methodologies in order to accurately compute submarines manoeuvring performances with acceptable CPU time. The final objective is to perform fully free and self-propelled simulation. This requires a RANSE free surface solver able to accurately predict forces and moments applied along the hull of a submerged body and on its appendages. In that way, this paper presents validations that have been conducted on a fixed model of the DARPA Suboff model for several angles of drift, and different configurations.
CitationDrouet, A. [et al.]. Simulation of submarine manoeuvring using navier-stokes solver. A: . CIMNE, 2011, p. 301-312.
URIhttp://hdl.handle.net/2117/333217
Collections
Share: