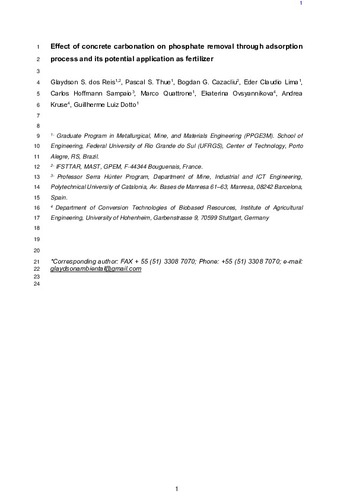 Except where otherwise noted, content on this work is licensed under a Creative Commons license : Attribution-NonCommercial-NoDerivs International
Abstract
Concrete slurry is an abundant, cheap, and commonly found waste all over the world where construction activities take place; concrete slurry, which is rich in calcium and metallic oxides, could be successfully employed in the phosphate (P) removal from aqueous media. For the first time, the effect of the carbonation process on concrete adsorbent properties and how it can influence on the removal of phosphate ions in aqueous media are studied. Besides, the potential applicability of P loaded concrete adsorbent is also evaluated. The results showed that a non-carbonated sample was more effective in the P removal, due to higher releasing of calcium (Ca2+) in comparison to carbonated sample. The dissolved Ca2+ from the dissolution of calcium hydroxide (Ca(OH)2), calcium carbonate (CaCO3), and calcium oxide (CaO) are preferably precipitated by phosphates in high pH solution, reflecting in a high initial adsorption rate. General order kinetic and Liu isotherm provided better-fitting models for the adsorption behavior of P onto both non-carbonated and carbonated concrete samples. Phosphate removal was mainly ruled by chemical adsorption through inner-sphere complexation and P precipitation on the surface of the adsorbent containing Ca2+ as an essential ion in the adsorption mechanism. Compared with other phosphate adsorbents, both non-carbonated and carbonated concrete showed to be economical and efficient adsorbent. The non-carbonated sample gave a high adsorption capacity of P (47.6 mg g-1) and presenting fast and high initial adsorption, reaching 72% of P removal within 5 min (min) at 22 °C, while carbonated showed adsorption capacity of 30.6 mg g-1, at the same experimental conditions. Therefore, concrete slurries can be used widely as an inexpensive phosphate-recovery adsorbent. Besides, the application of these P loaded waste as potential fertilizers in soil can be an exciting and environmentally approach for reusing this solid-waste. The environmental analysis highlighted that the adsorbents did not leach out chemicals above the allowable limits, preconized by The Food and Agriculture Organization of the United Nations (FAO) for irrigation waters. However, aspects related to monitoring the presence and mobility of heavy metals on soil must be better addressed and monitored.
Description
© 2020. This manuscript version is made available under the CC-BY-NC-ND 4.0 license http://creativecommons.org/licenses/by-nc-nd/4.0/
CitationDos Rei, G. [et al.]. Effect of concrete carbonation on phosphate removal through adsorption process and its potential application as fertilizer. "Journal of cleaner production", 20 Maig 2020, vol. 256, p. 120416: 1-120416: 12.
URIhttp://hdl.handle.net/2117/333187
DOI10.1016/j.jclepro.2020.120416
ISSN0959-6526
Publisher versionhttps://www.sciencedirect.com/science/article/pii/S0959652620304637
Collections
Share: