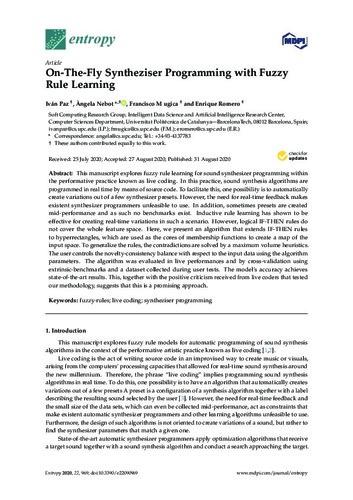 Document typeArticle
Rights accessOpen Access
Abstract
This manuscript explores fuzzy rule learning for sound synthesizer programming within the performative practice known as live coding. In this practice, sound synthesis algorithms are programmed in real time by means of source code. To facilitate this, one possibility is to automatically create variations out of a few synthesizer presets. However, the need for real-time feedback makes existent synthesizer programmers unfeasible to use. In addition, sometimes presets are created mid-performance and as such no benchmarks exist. Inductive rule learning has shown to be effective for creating real-time variations in such a scenario. However, logical IF-THEN rules do not cover the whole feature space. Here, we present an algorithm that extends IF-THEN rules to hyperrectangles, which are used as the cores of membership functions to create a map of the input space. To generalize the rules, the contradictions are solved by a maximum volume heuristics. The user controls the novelty-consistency balance with respect to the input data using the algorithm parameters. The algorithm was evaluated in live performances and by cross-validation using extrinsic-benchmarks and a dataset collected during user tests. The model’s accuracy achieves state-of-the-art results. This, together with the positive criticism received from live coders that tested our methodology, suggests that this is a promising approach.
CitationPaz-Ortiz, A.I. [et al.]. On-the-fly syntheziser programming with fuzzy rule learning. "Entropy: international and interdisciplinary journal of entropy and information studies", 31 Agost 2020, vol. 22, núm. 9, p. 1-15.
URIhttp://hdl.handle.net/2117/333093
DOI10.3390/e22090969
ISSN1099-4300
Publisher versionhttps://www.mdpi.com/1099-4300/22/9/969
Collections
Share: