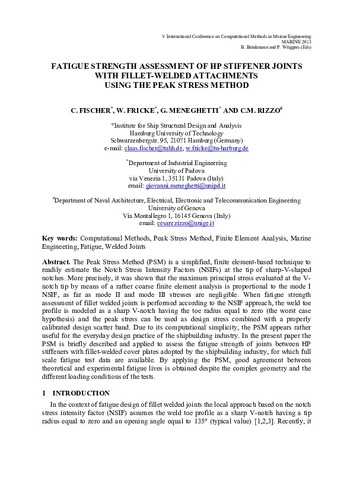 Show full item record
Fischer, C.
Fricke, W.
Meneghetti, G.
Rizzo, C.M.
Document typeConference report
PublisherCIMNE
Rights accessOpen Access
Abstract
The Peak Stress Method (PSM) is a simplified, finite element-based technique to readily estimate the Notch Stress Intensity Factors (NSIFs) at the tip of sharp-V-shaped notches. More precisely, it was shown that the maximum principal stress evaluated at the V-notch tip by means of a rather coarse finite element analysis is proportional to the mode I NSIF, as far as mode II and mode III stresses are negligible. When fatigue strength assessment of fillet welded joints is performed according to the NSIF approach, the weld toe profile is modeled as a sharp V-notch having the toe radius equal to zero (the worst case hypothesis) and the peak stress can be used as design stress combined with a properly calibrated design scatter band. Due to its computational simplicity, the PSM appears rather useful for the everyday design practice of the shipbuilding industry. In the present paper the PSM is briefly described and applied to assess the fatigue strength of joints between HP stiffeners with fillet-welded cover plates adopted by the shipbuilding industry, for which full scale fatigue test data are available. By applying the PSM, good agreement between theoretical and experimental fatigue lives is obtained despite the complex geometry and the different loading conditions of the tests.
CitationFischer, C. [et al.]. Fatigue strength assessment of HP stiffener joints with fillet-welded attachments using the peak stress method. A: MARINE V. "MARINE V : proceedings of the V International Conference on Computational Methods in Marine Engineering". CIMNE, 2013, p. 660-669. ISBN 978-84-941407-4-7.
URIhttp://hdl.handle.net/2117/333062
ISBN978-84-941407-4-7
Collections
Share: