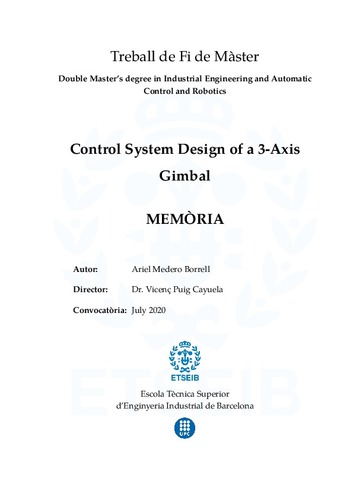 Document typeMaster thesis
Rights accessOpen Access
Abstract
Gimbals are precise devices used for orientation control in the 3D space. They can be used with mounted cameras to maintain horizontal orientation while being hand-held or even mounted on a helicopter, both of them, examples that are more and more common to see in the film industry. They are also widely used for hardware-in-the-loop tests of sensor technology, from testing smartphones gyroscopes to even test mission critical navigation devices for future spacecrafts. Despite their importance, industry still relies in the use of the classical PID controllers for the control of the gimbal axis. The objective of this master’s thesis is to develop a control system using the modern technique of Linear Parameter-Varying (LPV) control for one of such devices, a 3-Axis Gimbal developed by the Ingenia company. In order to develop this control system, in this master’s thesis it is explained the whole process required. From obtaining the mathematical model for the mechanical dynamics of the 3-Axis Gimbal, LPV controller design and also fault-tolerant strategies To obtain the gimbal model, the selected method was to follow the Lagrange formulation for serial-link objects. For the computation of the controllers, it is shown three different ways in which the LPV models in conjunction with the aid of Linear Matrix Inequalities (LMIs) optimization can be used. Then, an inverse kinematics and path generation algorithm suitable for gimbals designed for mounted camera applications was proposed. Finally, a fault tolerant strategy is implemented to help the gimbal control system to deal with partial sensor faults by making an online estimation of the faults and using virtual sensors to reconstruct the non faulty sensor signal.
SubjectsCamcorders -- Stability, Cameras -- Stability, Càmeres de vídeo -- Estabilitat, Càmeres fotogràfiques -- Estabilitat
URIhttp://hdl.handle.net/2117/332931
Collections
Share: