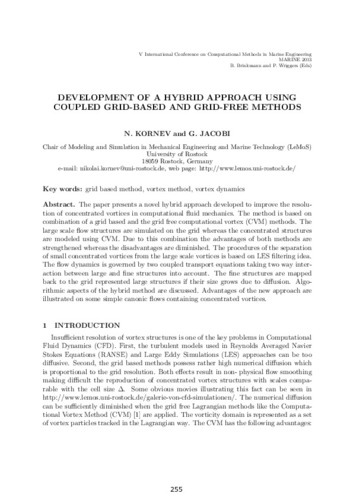 Show full item record
Kornev, N.
Jacobi, G.
Document typeConference report
PublisherCIMNE
Rights accessOpen Access
Abstract
The paper presents a novel hybrid approach developed to improve the resolu- tion of concentrated vortices in computational fluid mechanics. The method is based on combination of a grid based and the grid free computational vortex (CVM) methods. The large scale flow structures are simulated on the grid whereas the concentrated structures are modeled using CVM. Due to this combination the advantages of both methods are strengthened whereas the disadvantages are diminished. The procedures of the separation of small concentrated vortices from the large scale vortices is based on LES filtering idea. The flow dynamics is governed by two coupled transport equations taking two way inter- action between large and fine structures into account. The fine structures are mapped back to the grid represented large structures if their size grows due to diffusion. Algo- rithmic aspects of the hybrid method are discussed. Advantages of the new approach are illustrated on some simple canonic flows containing concentrated vortices.
CitationKornev, N.; Jacobi, G. Development of a hybrid approach using coupled grid-based and grid-free methods. A: MARINE V. "MARINE V : proceedings of the V International Conference on Computational Methods in Marine Engineering". CIMNE, 2013, p. 255-265. ISBN 978-84-941407-4-7.
URIhttp://hdl.handle.net/2117/332735
ISBN978-84-941407-4-7
Collections
Share: