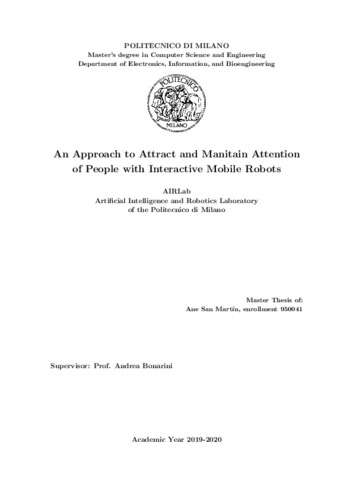 ; Bonarini, Andrea
CovenanteePolitecnico di Milano
Document typeMaster thesis
Rights accessOpen Access
Abstract
Autism Spectrum Disorder (ASD) are neuro-developed mental conditions which mainly affect the interaction in the social area of the affected people. In order to improve this disorder, different therapies have been developed by therapists, but there is not anyone which could work for all the cases due to the high variety of symptoms that these people can show. However, several studies indicate that they show preference toward interaction with objects, such as computers and robots, rather than with humans. The aim of this work is to develop interactions of a social robot, in terms of actions, movements, sounds and lights in order to interact with children with ASD. These interactions should create a pleasant environment in order to make the children involved in the therapy so that best results can be obtained. In most robots developed until now, two different issues can be observed: the robot is very expensive or the robot is made just to develop an improve a specific skill of the children. Taking these issues into account, our aim is to build a new, fully equipped social robot that has a relatively low cost and is able to interact with children in order to improve different skills of them. We named this robot Lagun. Lagun is equipped with a module v2 camera, speakers, ultrasound sensors, sensitive sensors, LEDs, Arduino Mega and Raspberry Pi 4 which enable the robot to identify the user and its intention so that an adequate action at each time instant can be performed by the robot. The main focus of this work is in the interaction between the child and the robot, which leads the work to an accurate development of the movements, taking care at any moment that the movement being performed is appealing for the child to make this one involved in the interaction. A way to complement this movement, will be by the use of the correct sounds and lights which lead to easier understanding of the state of the robot.
SubjectsAutism, Mobile robots, Autisme, Robots mòbils
URIhttp://hdl.handle.net/2117/332676
Collections
Share: