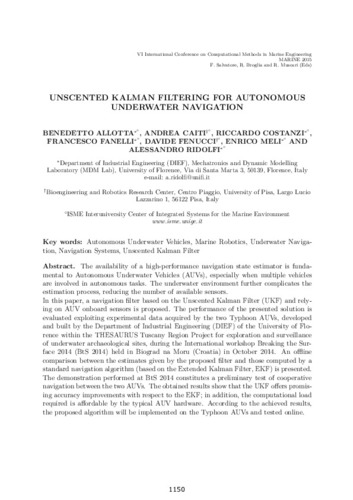 Show full item record
Allotta, Benedetto
Caiti, Andrea
Constanzi, Riccardo
Fanelli, Francesco
Fenucci, Davide
Meli, Enrico
Ridolfi, Alessandro
Document typeConference report
PublisherCIMNE
Rights accessOpen Access
Abstract
The availability of a high-performance navigation state estimator is fundamental to Autonomous Underwater Vehicles (AUVs), especially when multiple vehicles are involved in autonomous tasks. The underwater environment further complicates the estimation process, reducing the number of available sensors. In this paper, a navigation filter based on the Unscented Kalman Filter (UKF) and rely- ing on AUV onboard sensors is proposed. The performance of the presented solution is evaluated exploiting experimental data acquired by the two Typhoon AUVs, developed and built by the Department of Industrial Engineering (DIEF) of the University of Flo- rence within the THESAURUS Tuscany Region Project for exploration and surveillance of underwater archaeological sites, during the International workshop Breaking the Sur- face 2014 (BtS 2014) held in Biograd na Moru (Croatia) in October 2014. An offline comparison between the estimates given by the proposed filter and those computed by a standard navigation algorithm (based on the Extended Kalman Filter, EKF) is presented. The demonstration performed at BtS 2014 constitutes a preliminary test of cooperative navigation between the two AUVs. The obtained results show that the UKF offers promis- ing accuracy improvements with respect to the EKF; in addition, the computational load required is affordable by the typical AUV hardware. According to the achieved results, the proposed algorithm will be implemented on the Typhoon AUVs and tested online.
CitationAllotta, B. [et al.]. Unscented kalman filltering for autonomous underwater navigation. A: MARINE VI. "MARINE VI : proceedings of the VI International Conference on Computational Methods in Marine Engineering". CIMNE, 2015, p. 1150-1159. ISBN 978-84-943928-6-3.
URIhttp://hdl.handle.net/2117/332628
ISBN978-84-943928-6-3
Collections
Share: