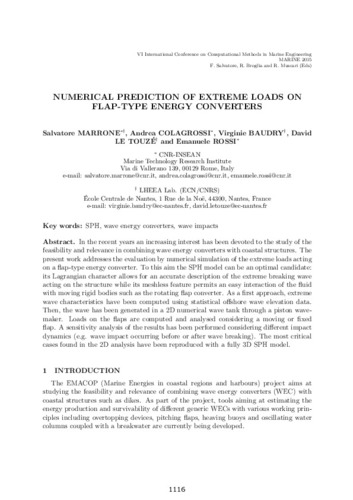 Show full item record
Marrone, Salvatore
Colagrossi, Andrea
Baudry, Virginie
Le Touzé, David
Rosi, Emanuele
Document typeConference report
PublisherCIMNE
Rights accessOpen Access
Abstract
In the recent years an increasing interest has been devoted to the study of the feasibility and relevance in combining wave energy converters with coastal structures. The present work addresses the evaluation by numerical simulation of the extreme loads acting on a flap-type energy converter. To this aim the SPH model can be an optimal candidate: its Lagrangian character allows for an accurate description of the extreme breaking wave acting on the structure while its meshless feature permits an easy interaction of the fluid with moving rigid bodies such as the rotating flap converter. As a first approach, extreme wave characteristics have been computed using statistical offshore wave elevation data. Then, the wave has been generated in a 2D numerical wave tank through a piston wave- maker. Loads on the flaps are computed and analysed considering a moving or fixed flap. A sensitivity analysis of the results has been performed considering different impact dynamics (e.g. wave impact occurring before or after wave breaking). The most critical cases found in the 2D analysis have been reproduced with a fully 3D SPH model.
CitationMarrone, S. [et al.]. Numerical prediction of extreme loads on flap-type energy converters. A: MARINE VI. "MARINE VI : proceedings of the VI International Conference on Computational Methods in Marine Engineering". CIMNE, 2015, p. 1116-1127. ISBN 978-84-943928-6-3.
URIhttp://hdl.handle.net/2117/332624
ISBN978-84-943928-6-3
Collections
Share: