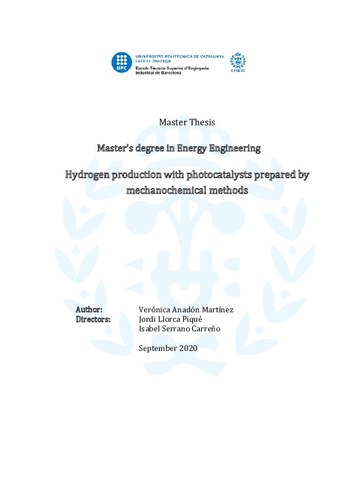 Except where otherwise noted, content on this work is licensed under a Creative Commons license : Attribution-NonCommercial-ShareAlike 3.0 Spain
Abstract
The objective of this thesis is to study the hydrogen production according to the preparation of photocatalysts with mechanochemical methods from semiconductors such as titanium dioxide. The preparation of the photocatalysts and their assay were performed in a laboratory with a photoreactor. In this way it was possible to determine by the different techniques and chemical compositions, which formulation was the most effective. The mechanochemical methods are simple and environmentally friendly because no solvents are used; they are faster and easily reproducible. The technique by which the experiments were performed is called ball milling. This method is a is a mechanical technique widely used to grind powders into fine particles and blend materials. The samples used for this study were a mixture of titanium dioxide (TiO2) with different chemical compositions of another semiconductor. These were tin (IV) oxide (SnO2), zinc oxide (ZnO), copper (II) oxide (CuO), cadmium sulphide (CdS) and zinc sulphide (ZnS). Once the sample was obtained by ball milling from different compositions of 90% TiO2 plus 10% from another semiconductor mentioned before, its reactivity was analysed in a laboratory photoreactor to determine how much hydrogen produces each photocatalyst. This analysis has determined that the photocatalyst that achieves the best results in terms of hydrogen production is the combination of 90% TiO2 and 10% CuO, since CuO semiconductor has a smaller band gap than the other semiconductors analysed. Therefore, the semiconductors that had a higher band gap, such as ZnO or ZnS, were the ones that obtained the worst results, except for the SnO2 photocatalyst, as it was the second photocatalyst that worked best. Therefore, according to the results obtained, it has been determined that not only the semiconductor band gap must be considered when preparing a photocatalyst, but also the position of the CB and VB of each semiconductor, to be able to determine which combination of elements is most suitable.
SubjectsHydrogen as fuel, Photocatalysis, Hidrogen com a combustible, Fotocatàlisi
DegreeMÀSTER UNIVERSITARI EN ENGINYERIA DE L'ENERGIA (Pla 2013)
URIhttp://hdl.handle.net/2117/332477
Collections
Share: