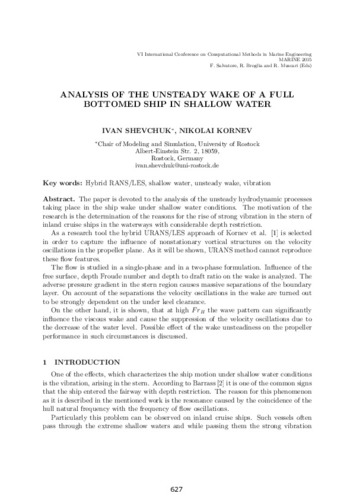 Show full item record
Shevchuk, Ivan
Kornev, Nikolai
Document typeConference report
PublisherCIMNE
Rights accessOpen Access
Abstract
The paper is devoted to the analysis of the unsteady hydrodynamic processes taking place in the ship wake under shallow water conditions. The motivation of the research is the determination of the reasons for the rise of strong vibration in the stern of inland cruise ships in the waterways with considerable depth restriction. As a research tool the hybrid URANS/LES approach of Kornev et al. [1] is selected in order to capture the influence of nonstationary vortical structures on the velocity oscillations in the propeller plane. As it will be shown, URANS method cannot reproduce these flow features. The flow is studied in a single-phase and in a two-phase formulation. Influence of the free surface, depth Froude number and depth to draft ratio on the wake is analyzed. The adverse pressure gradient in the stern region causes massive separations of the boundary layer. On account of the separations the velocity oscillations in the wake are turned out to be strongly dependent on the under keel clearance. On the other hand, it is shown, that at high F rH the wave pattern can significantly influence the viscous wake and cause the suppression of the velocity oscillations due to the decrease of the water level. Possible effect of the wake unsteadiness on the propeller performance in such circumstances is discussed.
CitationShevchuk, I.; Kornev, N. Analysis of the unsteady wake of a full bottomed ship in shallow water. A: MARINE VI. "MARINE VI : proceedings of the VI International Conference on Computational Methods in Marine Engineering". CIMNE, 2015, p. 627-638. ISBN 978-84-943928-6-3.
URIhttp://hdl.handle.net/2117/332464
ISBN978-84-943928-6-3
Collections
Share: