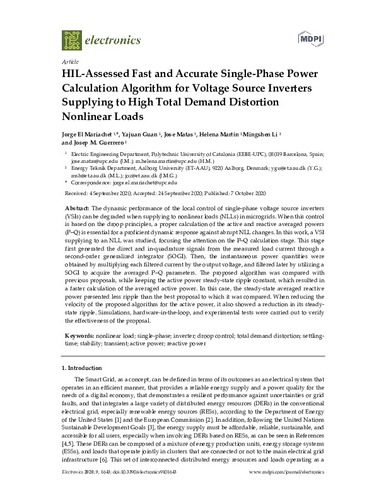 Li, Mingshen
Guerrero, Josep M.
Document typeArticle
Rights accessOpen Access
Abstract
The dynamic performance of the local control of single-phase voltage source inverters (VSIs) can be degraded when supplying to nonlinear loads (NLLs) in microgrids. When this control is based on the droop principles, a proper calculation of the active and reactive averaged powers (P–Q) is essential for a proficient dynamic response against abrupt NLL changes. In this work, a VSI supplying to an NLL was studied, focusing the attention on the P–Q calculation stage. This stage first generated the direct and in-quadrature signals from the measured load current through a second-order generalized integrator (SOGI). Then, the instantaneous power quantities were obtained by multiplying each filtered current by the output voltage, and filtered later by utilizing a SOGI to acquire the averaged P–Q parameters. The proposed algorithm was compared with previous proposals, while keeping the active power steady-state ripple constant, which resulted in a faster calculation of the averaged active power. In this case, the steady-state averaged reactive power presented less ripple than the best proposal to which it was compared. When reducing the velocity of the proposed algorithm for the active power, it also showed a reduction in its steady-state ripple. Simulations, hardware-in-the-loop, and experimental tests were carried out to verify the effectiveness of the proposal.
CitationEl Mariachet, J. [et al.]. HIL-assessed fast and accurate single-phase power calculation algorithm for voltage source inverters supplying to high total demand distortion nonlinear loads. "Electronics", 7 Octubre 2020, vol. 9, núm. 10, p. 1643:1-1643:24.
URIhttp://hdl.handle.net/2117/332453
DOI10.3390/electronics9101643
ISSN2079-9292
Other identifiershttps://www.mdpi.com/2079-9292/9/10/1643
Collections
Share: