Effect of processing conditions on the microstructure, mechanical properties and corrosion behavior of two austenitic stainless steels for bioimplant applications 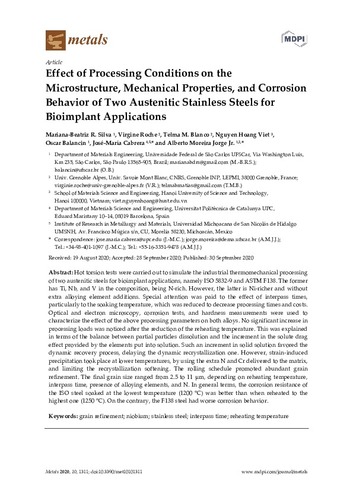 Moreira Jorge Júnior, Alberto
Document typeArticle
PublisherMultidisciplinary Digital Publishing Institute (MDPI)
Rights accessOpen Access
Abstract
Hot torsion tests were carried out to simulate the industrial thermomechanical processing of two austenitic steels for bioimplant applications, namely ISO 5832-9 and ASTM F138. The former has Ti, Nb, and V in the composition, being N-rich. However, the latter is Ni-richer and without extra alloying element additions. Special attention was paid to the effect of interpass times, particularly to the soaking temperature, which was reduced to decrease processing times and costs. Optical and electron microscopy, corrosion tests, and hardness measurements were used to characterize the effect of the above processing parameters on both alloys. No significant increase in processing loads was noticed after the reduction of the reheating temperature. This was explained in terms of the balance between partial particles dissolution and the increment in the solute drag effect provided by the elements put into solution. Such an increment in solid solution favored the dynamic recovery process, delaying the dynamic recrystallization one. However, strain-induced precipitation took place at lower temperatures, by using the extra N and Cr delivered to the matrix, and limiting the recrystallization softening. The rolling schedule promoted abundant grain refinement. The final grain size ranged from 2.5 to 11 µm, depending on reheating temperature, interpass time, presence of alloying elements, and N. In general terms, the corrosion resistance of the ISO steel soaked at the lowest temperature (1200 °C) was better than when reheated to the highest one (1250 °C). On the contrary, the F138 steel had worse corrosion behavior
CitationReis, M.B. [et al.]. Effect of processing conditions on the microstructure, mechanical properties and corrosion behavior of two austenitic stainless steels for bioimplant applications. "Metals", Octubre 2020, vol. 10, núm. 10, p. 1311:1-1311:25.
URIhttp://hdl.handle.net/2117/332443
DOI10.3390/met10101311
ISSN2075-4701
Publisher versionhttps://www.mdpi.com/2075-4701/10/10/1311
Collections
Share: