Design and operation of a hybrid power system for Menorca 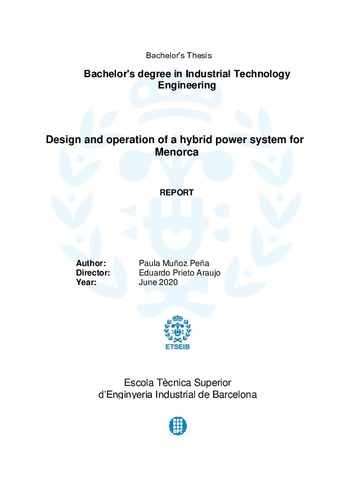 Document typeBachelor thesis
Rights accessOpen Access
Abstract
This project consists on the design of a power system based on renewable sources for the island of Menorca. The main objective of this design is to make the power system of the island as renewable as possible. To do so, there have been selected photovoltaic (PV) and wind power as the main renewable sources, non-renewable sources considered are fuel (case 1) or a cable that connects Menorca to Mallorca and provides energy from the peninsula (case 2), the system will also include batteries. First, there is an energetic study of how much power can be obtained from each source. Then, the methodology used to study the system is by simulation and later optimization. The simulation includes two parts, an energetic and an economic one, and returns the desired parameters given a system configuration defined as the number of PV modules, the number of wind turbines, and the battery capacity in MWh. The energy-based simulation obtains the distribution of power for each source and the % of renewable energy consumed, among others. The economic simulation, inspired by the Levelized Cost of Energy (LCOE), returns the cost per MWh of energy consumed. The optimization objective is finding the system configuration that provides the highest % of renewable energy and the lowest costs per MWh. To do that there has been used an indicator defined as the cost per MWh divided between the % of renewables, and to minimize it. There has been established a maximum of exceeding energy (that is produced in excess and won’t be used), and stability restrictions are not taken into account. After that, there has been carried out a sensitivity analysis to know how the results obtained previously may change in the future according to the cost trends of the sources. Results show that the % of renewables is in all situations more than 60%, the exact value and the average cost of generation depends on the costs of all the components of the system. When the non-renewable source is much more expensive than the renewables, the average cost increases and the % of renewables also highly increases; while when costs of renewables and non-renewables are more similar, it led to situations with lower average costs and lower penetration of renewables. Future situations predict an increase in the % of renewables, and in most of the cases the average costs will be reduced.
SubjectsHybrid power systems, Sistemes d'energia híbrids
URIhttp://hdl.handle.net/2117/332375
Collections
Share: