An energy approach to the fatigue life of ship propulsion systems 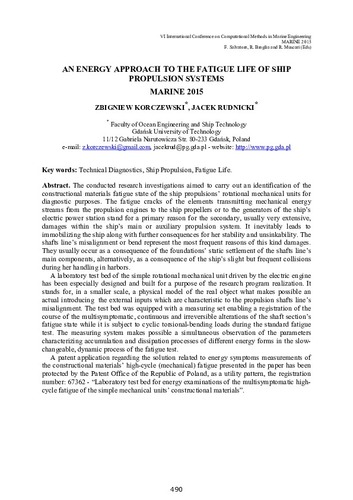 Show full item record
Korczewski, Zbigniew
Rudnicki, Jacek
Document typeConference report
PublisherCIMNE
Rights accessOpen Access
Abstract
The conducted research investigations aimed to carry out an identification of the constructional materials fatigue state of the ship propulsions’ rotational mechanical units for diagnostic purposes. The fatigue cracks of the elements transmitting mechanical energy streams from the propulsion engines to the ship propellers or to the generators of the ship’s electric power station stand for a primary reason for the secondary, usually very extensive, damages within the ship’s main or auxiliary propulsion system. It inevitably leads to immobilizing the ship along with further consequences for her stability and unsinkability. The shafts line’s misalignment or bend represent the most frequent reasons of this kind damages. They usually occur as a consequence of the foundations’ static settlement of the shafts line’s main components, alternatively, as a consequence of the ship’s slight but frequent collisions during her handling in harbors. A laboratory test bed of the simple rotational mechanical unit driven by the electric engine has been especially designed and built for a purpose of the research program realization. It stands for, in a smaller scale, a physical model of the real object what makes possible an actual introducing the external inputs which are characteristic to the propulsion shafts line’s misalignment. The test bed was equipped with a measuring set enabling a registration of the course of the multisymptomatic, continuous and irreversible alterations of the shaft section’s fatigue state while it is subject to cyclic torsional-bending loads during the standard fatigue test. The measuring system makes possible a simultaneous observation of the parameters characterizing accumulation and dissipation processes of different energy forms in the slow- changeable, dynamic process of the fatigue test. A patent application regarding the solution related to energy symptoms measurements of the constructional materials’ high-cycle (mechanical) fatigue presented in the paper has been protected by the Patent Office of the Republic of Poland, as a utility pattern, the registration number: 67362 - “Laboratory test bed for energy examinations of the multisymptomatic high- cycle fatigue of the simple mechanical units’ constructional materials”.
CitationKorczewski, Z.; Rudnicki, J. An energy approach to the fatigue life of ship propulsion systems. A: MARINE VI. "MARINE VI : proceedings of the VI International Conference on Computational Methods in Marine Engineering". CIMNE, 2015, p. 490-501. ISBN 978-84-943928-6-3.
URIhttp://hdl.handle.net/2117/332354
ISBN978-84-943928-6-3
Collections
Share: