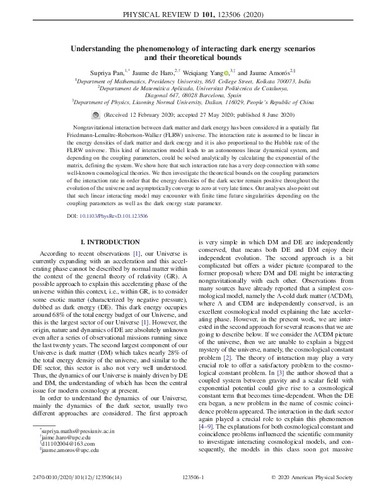 Document typeArticle
PublisherAmerican Physical Society (APS)
Rights accessOpen Access
Abstract
Nongravitational interaction between dark matter and dark energy has been considered in a spatially flat Friedmann-Lemaître-Robertson-Walker (FLRW) universe. The interaction rate is assumed to be linear in the energy densities of dark matter and dark energy and it is also proportional to the Hubble rate of the FLRW universe. This kind of interaction model leads to an autonomous linear dynamical system, and depending on the coupling parameters, could be solved analytically by calculating the exponential of the matrix, defining the system. We show here that such interaction rate has a very deep connection with some well-known cosmological theories. We then investigate the theoretical bounds on the coupling parameters of the interaction rate in order that the energy densities of the dark sector remain positive throughout the evolution of the universe and asymptotically converge to zero at very late times. Our analyses also point out that such linear interacting model may encounter with finite time future singularities depending on the coupling parameters as well as the dark energy state parameter. © 2020 American Physical Society
CitationPan, S. [et al.]. Understanding the phenomenology of interacting dark energy scenarios and their theoretical bounds. "Physical review D. Particles, fields, gravitation and cosmology", 15 Juny 2020, vol. 101, núm. 12, p. 123506-1-123506-14.
URIhttp://hdl.handle.net/2117/332252
DOI10.1103/PhysRevD.101.123506
ISSN1550-7998
Publisher versionhttps://journals.aps.org/prd/abstract/10.1103/PhysRevD.101.123506
Collections
Share: