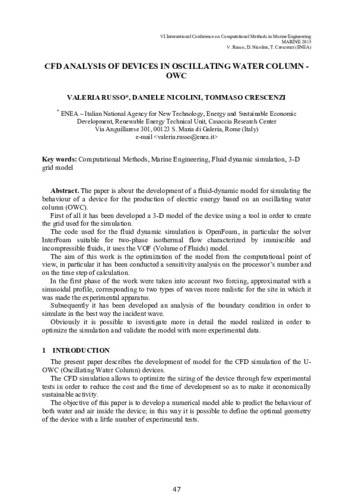 Show full item record
Russo, Valeria
Nicolini, Daniele
Crescenzi, Tommaso
Document typeConference report
PublisherCIMNE
Rights accessOpen Access
Abstract
The paper is about the development of a fluid-dynamic model for simulating the behaviour of a device for the production of electric energy based on an oscillating water column (OWC). First of all it has been developed a 3-D model of the device using a tool in order to create the grid used for the simulation. The code used for the fluid dynamic simulation is OpenFoam, in particular the solver InterFoam suitable for two-phase isothermal flow characterized by immiscible and incompressible fluids, it uses the VOF (Volume of Fluids) model. The aim of this work is the optimization of the model from the computational point of view, in particular it has been conducted a sensitivity analysis on the processor’s number and on the time step of calculation. In the first phase of the work were taken into account two forcing, approximated with a sinusoidal profile, corresponding to two types of waves more realistic for the site in which it was made the experimental apparatus. Subsequently it has been developed an analysis of the boundary condition in order to simulate in the best way the incident wave. Obviously it is possible to investigate more in detail the model realized in order to optimize the simulation and validate the model with more experimental data.
CitationRusso, V.; Nicolini, D.; Crescenzi, T. CFD analysis of devices i oscillating water column - OWC. A: MARINE VI. "MARINE VI : proceedings of the VI International Conference on Computational Methods in Marine Engineering". CIMNE, 2015, p. 47-57. ISBN 978-84-943928-6-3.
URIhttp://hdl.handle.net/2117/332167
ISBN978-84-943928-6-3
Collections
Share: