Power System Modelling A techno-economic analysis of the island of Menorca, Spain 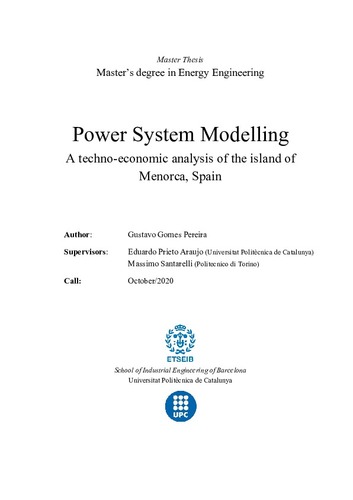 Tipus de documentProjecte Final de Màster Oficial
Condicions d'accésAccés obert
Abstract
It is hard to overstate the need for humanity to address what is arguably one of the most pressing issues of our generation: climate change. Although electricity generation only accounts for about a quarter of global carbon emissions, it is one of the sectors for which a wide range of technologies are already commercially available and increasingly competitive. The decarbonization of other energy-intensive and high emitting sectors: agriculture, transportation, heating and industrial processes such as cement and steel production, although still lagging behind due to both technical and economic challenges, are beginning to show signs of progress. In some cases, electrification will be the most viable path to decarbonization, as seen in the light-duty transportation sector, where electric vehicles are already a reality. For many others, technological innovation will play a crucial role in bringing viable solutions to market. If approached pragmatically, the power sector is in a position to be the first piece of the puzzle to transition to a fundamentally sustainable way of sourcing energy. The analysis herein presented aims to identify the cost-optimum power system that can reliably supply the Spanish island of Menorca with electricity for the next ten years, from 2021 to 2030. Menorca’s power sector is computationally modelled and simulated using the open-source power system modelling tool Switch 2.0. The study is divided into different scenarios and the results of the techno-economic optimization are presented and discussed in terms of their technical feasibility, carbon footprint and costs. In addition to a standard base case scenario, the impact of factors such as fuel cost fluctuations and policy-related externalities (carbon price and renewable energy mandates) are also assessed as separate scenarios. The results of the techno-economic analysis show a clear and consistent trend across all scenarios: renewable energy technologies, namely solar PV and onshore wind power, represent the cheapest source of new bulk electricity generation in Menorca. As such, they are poised to drastically change the current fossil-based and centralized power system of the island, becoming the main sources of electricity. The base case – the most conservative scenario, in which carbon emissions are not priced, fuel costs are kept constant and no renewable energy mandate is set – solar PV and wind power account for two thirds of the total electricity supply by 2030. The penetration of renewables is even higher for the other scenarios modelled.
MatèriesElectric power supplies to apparatus, Economics, Fonts d'alimentació, Anàlisi econòmica
TitulacióMÀSTER UNIVERSITARI EN ENGINYERIA DE L'ENERGIA (Pla 2013)
URIhttp://hdl.handle.net/2117/332163
Col·leccions
Comparteix: