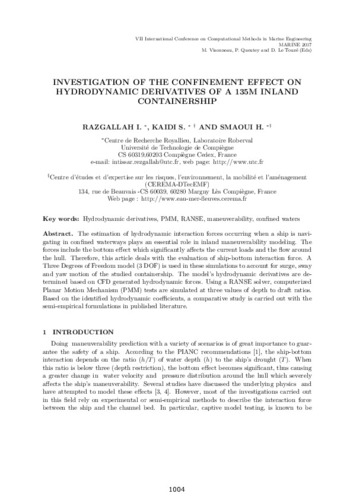 Show full item record
Razgallah, I.
Kaidi, S.
Smaoui, H.
Document typeConference report
PublisherCIMNE
Rights accessOpen Access
Abstract
The estimation of hydrodynamic interaction forces occurring when a ship is navi- gating in co sential role in inland maneuverability modeling. The forces include the bottom eﬀect which signiﬁcantly aﬀects the current loads and the ﬂow around the hull. Therefore, this article deals with the evaluation of ship-bottom interaction force. A Three Degrees of Freedom model (3 DOF) is used in these simulations to account for surge, sway and yaw motion of the studied containership. The model’s hydrodynamic derivatives are de- termined based on CFD generated hydrodynamic forces. Using a RANSE solver, computerized Planar Motion Mechanism (PMM) tests are simulated at three values of depth to draft ratios. Based on the identiﬁed hydrodynamic coeﬃcients, a tudy is carried out with the semi-empirical formulations in published literature.
CitationRazgallah, I.; Kaidi, S.; Smaoui, H. Investigation of the confinement effect on hydrodynamic atives of a 135m inland containership. A: MARINE VII. "MARINE VII : proceedings of the VII International Conference on Computational Methods in Marine Engineering". CIMNE, 2017, p. 1004-1015. ISBN 978-84-946909-8-3.
URIhttp://hdl.handle.net/2117/332144
ISBN978-84-946909-8-3
Collections
Share: