iMOVE: Development of a hybrid control interface based on sEMG and movement signals for an assistive robotic manipulator 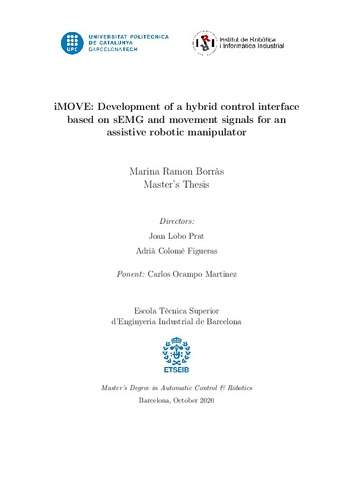 CovenanteeInstitut de Robòtica i Informàtica Industrial
Document typeMaster thesis
Rights accessOpen Access
Abstract
For many people with upper limb disabilities, simple activities of daily living such as drinking, opening a door, or pushing an elevator button require the assistance of a caregiver; which reduces the independence of the individual. Assistive robotic systems controlled via human-robot interface could enable these people to perform this kind of tasks autonomously again and thereby increase their independence and quality of life. Moreover, this interface could encourage rehabilitation of motor functions because the individual would require to perform its remaining body movements and muscle activity to provide control signals. This project aims at developing a novel hybrid control interface that combines remaining movements and muscle activity of the upper body to control position and impedance of a robotic manipulator. This thesis presents a Cartesian position control system for KINOVA Gen3 robotic arm, which performs a proportional-derivative control low based to the Jacobian transpose method, that does not require inverse kinematics. A second control is proposed to change the robot’s rigidity in real-time based on measurements of muscle activity (sEMG). This control allows the user to modulate the robot’s impedance while performing a task. Moreover, it presents a body-machine interface that maps the motions of the upper body (head and shoulders) to the space of robot control signals. Its uses the principal component analysis algorithm for dimensionality reduction. The results demonstrate that combining the three methods presented above, the user can control robot positions with head and shoulders movements, while also adapting the robot’s impedance depending on its muscle activation. In the future work the performance of this system is going to be tested in patients with severe movement impairments.
SubjectsMedical care, Robots, Robots, Assistència mèdica
URIhttp://hdl.handle.net/2117/332127
Collections
Share: