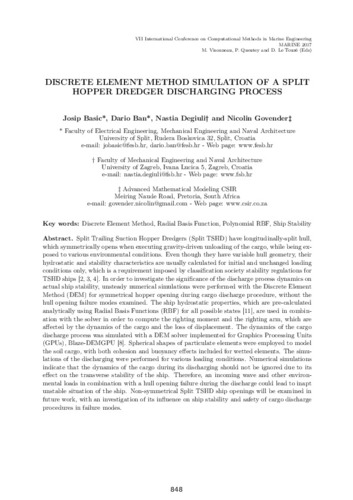 Show full item record
Basic, Josip
Ban, Dario
Degiuli, Nastia
Govender, Nicolin
Document typeConference report
PublisherCIMNE
Rights accessOpen Access
All rights reserved. This work is protected by the corresponding intellectual and industrial property rights. Without prejudice to any existing legal exemptions, reproduction, distribution, public communication or transformation of this work are prohibited without permission of the copyright holder
Abstract
Split Trailing Suction Hopper Dredgers (Split TSHD) have longitudinally-split hull, which symmetrically opens when executing gravity-driven unloading of the cargo, while being ex- posed to various environmental conditions. Even though they have variable hull geometry, their hydrostatic and stability characteristics are usually calculated for initial and unchanged loading conditions only, which is a requirement imposed by classification society stability regulations for TSHD ships [2, 3, 4]. In order to investigate the significance of the discharge process dynamics on actual ship stability, unsteady numerical simulations were performed with the Discrete Element Method (DEM) for symmetrical hopper opening during cargo discharge procedure, without the hull opening failure modes examined. The ship hydrostatic properties, which are pre-calculated analytically using Radial Basis Functions (RBF) for all possible states [11], are used in combin- ation with the solver in order to compute the righting moment and the righting arm, which are affected by the dynamics of the cargo and the loss of displacement. The dynamics of the cargo discharge process was simulated with a DEM solver implemented for Graphics Processing Units (GPUs), Blaze-DEMGPU [8]. Spherical shapes of particulate elements were employed to model the soil cargo, with both cohesion and buoyancy effects included for wetted elements. The simu- lations of the discharging were performed for various loading conditions. Numerical simulations indicate that the dynamics of the cargo during its discharging should not be ignored due to its effect on the transverse stability of the ship. Therefore, an incoming wave and other environ- mental loads in combination with a hull opening failure during the discharge could lead to inapt unstable situation of the ship. Non-symmetrical Split TSHD ship openings will be examined in future work, with an investigation of its influence on ship stability and safety of cargo discharge procedures in failure modes.
CitationBasic, J. [et al.]. Discrete element method simulation of a split hopper dredger discharging process. A: MARINE VII. "MARINE VII : proceedings of the VII International Conference on Computational Methods in Marine Engineering". CIMNE, 2017, p. 848-860. ISBN 978-84-946909-8-3.
URIhttp://hdl.handle.net/2117/332080
ISBN978-84-946909-8-3
Collections
Share: