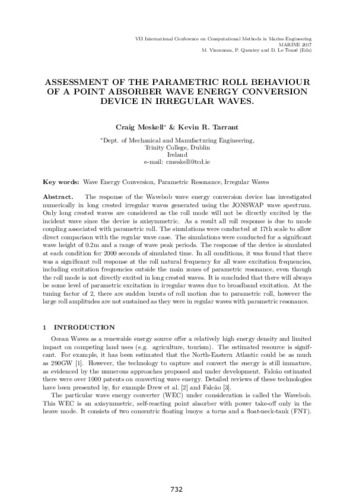 Show full item record
Meskell, Craig
Tarrant, Kevin R.
Document typeConference report
PublisherCIMNE
Rights accessOpen Access
Abstract
The response of the Wavebob wave energy conversion device has investigated numerically in long crested irregular waves generated using the JONSWAP wave spectrum. Only long crested waves are considered as the roll mode will not be directly excited by the incident wave since the device is axisymmetric. As a result all roll response is due to mode coupling associated with parametric roll. The simulations were conducted at 17th scale to allow direct comparison with the regular wave case. The simulations were conducted for a significant wave height of 0.2m and a range of wave peak periods. The response of the device is simulated at each condition for 2000 seconds of simulated time. In all conditions, it was found that there was a significant roll response at the roll natural frequency for all wave excitation frequencies, including excitation frequencies outside the main zones of parametric resonance, even though the roll mode is not directly excited in long crested waves. It is concluded that there will always be some level of parametric excitation in irregular waves due to broadband excitation. At the tuning factor of 2, there are sudden bursts of roll motion due to parametric roll, however the large roll amplitudes are not sustained as they were in regular waves with parametric resonance.
CitationMeskell, C.; Tarrant, K.R. Assessment of the parametric roll behaviour of a point absorber wave energy conversion device in irregular waves. A: MARINE VII. "MARINE VII : proceedings of the VII International Conference on Computational Methods in Marine Engineering". CIMNE, 2017, p. 732-743. ISBN 978-84-946909-8-3.
URIhttp://hdl.handle.net/2117/332038
ISBN978-84-946909-8-3
Collections
Share: