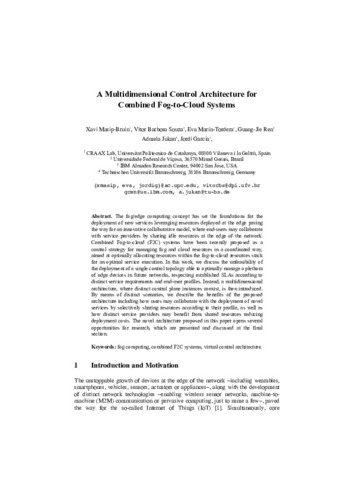 Document typeConference report
PublisherSpringer
Rights accessOpen Access
All rights reserved. This work is protected by the corresponding intellectual and industrial property rights. Without prejudice to any existing legal exemptions, reproduction, distribution, public communication or transformation of this work are prohibited without permission of the copyright holder
ProjectmF2C - Towards an Open, Secure, Decentralized and Coordinated Fog-to-Cloud Management Ecosystem (EC-H2020-730929)
GESTION DE UNA ARQUITECTURA JERARQUICA FOG-TO-CLOUD PARA ESCENARIOS IOT: COMPARTICION DE RECURSOS (AEI-RTI2018-094532-B-I00)
Abstract
The fog/edge computing concept has set the foundations for the deployment of new services leveraging resources deployed at the edge paving the way for an innovative collaborative model, where end-users may collaborate with service providers by sharing idle resources at the edge of the network. Combined Fog-to-Cloud (F2C) systems have been recently proposed as a control strategy for managing fog and cloud resources in a coordinated way, aimed at optimally allocating resources within the fog-to-cloud resources stack for an optimal service execution. In this work, we discuss the unfeasibility of the deployment of a single control topology able to optimally manage a plethora of edge devices in future networks, respecting established SLAs according to distinct service requirements and end-user profiles. Instead, a multidimensional architecture, where distinct control plane instances coexist, is then introduced. By means of distinct scenarios, we describe the benefits of the proposed architecture including how users may collaborate with the deployment of novel services by selectively sharing resources according to their profile, as well as how distinct service providers may benefit from shared resources reducing deployment costs. The novel architecture proposed in this paper opens several opportunities for research, which are presented and discussed at the final section.
CitationMasip, X. [et al.]. A multidimensional control architecture for combined fog-to-cloud systems. A: Future of Information and Communication Conference. "Advances in Information and Communication Proceedings of the 2020 Future of Information and Communication Conference". Berlín: Springer, 2020, p. 281-299. ISBN 978-3-030-39445-5. DOI 10.1007/978-3-030-39445-5_22.
URIhttp://hdl.handle.net/2117/331954
DOI10.1007/978-3-030-39445-5_22
ISBN978-3-030-39445-5
Publisher versionhttps://link.springer.com/chapter/10.1007%2F978-3-030-39445-5_22
Other identifiershttps://www.researchgate.net/publication/339448117_A_Multidimensional_Control_Architecture_for_Combined_Fog-to-Cloud_Systems
Collections
Share: