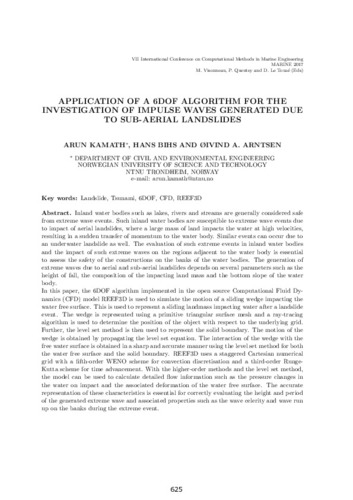 Show full item record
Kamath, Arun
Bihs, Hans
Arntsen, Oivind A.
Document typeConference report
PublisherCIMNE
Rights accessOpen Access
Abstract
Inland water bodies such as lakes, rivers and streams are generally considered safe from extreme wave events. Such inland water bodies are susceptible to extreme wave events due to impact of aerial landslides, where a large mass of land impacts the water at high velocities, resulting in a sudden transfer of momentum to the water body. Similar events can occur due to an underwater landslide as well. The evaluation of such extreme events in inland water bodies and the impact of such extreme waves on the regions adjacent to the water body is essential to assess the safety of the constructions on the banks of the water bodies. The generation of extreme waves due to aerial and sub-aerial landslides depends on several parameters such as the height of fall, the composition of the impacting land mass and the bottom slope of the water body. In this paper, the 6DOF algorithm implemented in the open source Computational Fluid Dy- namics (CFD) model REEF3D is used to simulate the motion of a sliding wedge impacting the water free surface. This is used to represent a sliding landmass impacting water after a landslide event. The wedge is represented using a primitive triangular surface mesh and a ray-tracing algorithm is used to determine the position of the object with respect to the underlying grid. Further, the level set method is then used to represent the solid boundary. The motion of the wedge is obtained by propagating the level set equation. The interaction of the wedge with the free water surface is obtained in a sharp and accurate manner using the level set method for both the water free surface and the solid boundary. REEF3D uses a staggered Cartesian numerical grid with a fifth-order WENO scheme for convection discretisation and a third-order Runge- Kutta scheme for time advancement. With the higher-order methods and the level set method, the model can be used to calculate detailed flow information such as the pressure changes in the water on impact and the associated deformation of the water free surface. The accurate representation of these characteristics is essential for correctly evaluating the height and period of the generated extreme wave and associated properties such as the wave celerity and wave run up on the banks during the extreme event.
CitationKamath, A.; Bihs, H.; Arntsen, O.A. Application of a 6DOF algorithm for the investigation of impulse waves generated due to sub-aerial landslides. A: MARINE VII. "MARINE VII : proceedings of the VII International Conference on Computational Methods in Marine Engineering". CIMNE, 2017, p. 625-634. ISBN 978-84-946909-8-3.
URIhttp://hdl.handle.net/2117/331943
ISBN978-84-946909-8-3
Collections
Share: