The effect of wave in-deck in conventional pushover analysis 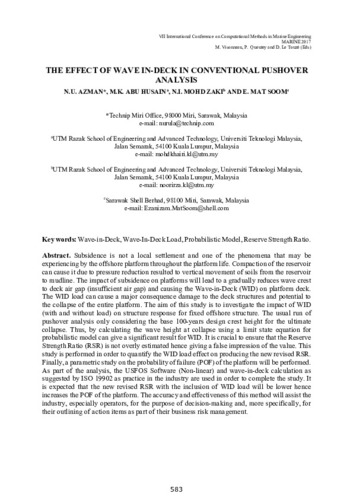 Show full item record
Azman, N.U.
Abu Husain, M.K.
Mohd Zaki, N.I.
Mat Soom, E.
Document typeConference report
PublisherCIMNE
Rights accessOpen Access
Abstract
Subsidence is not a local settlement and one of the phenomena that may be experiencing by the offshore platform throughout the platform life. Compaction of the reservoir can cause it due to pressure reduction resulted to vertical movement of soils from the reservoir to mudline. The impact of subsidence on platforms will lead to a gradually reduces wave crest to deck air gap (insufficient air gap) and causing the Wave-in-Deck (WID) on platform deck. The WID load can cause a major consequence damage to the deck structures and potential to the collapse of the entire platform. The aim of this study is to investigate the impact of WID (with and without load) on structure response for fixed offshore structure. The usual run of pushover analysis only considering the base 100-years design crest height for the ultimate collapse. Thus, by calculating the wave height at collapse using a limit state equation for probabilistic model can give a significant result for WID. It is crucial to ensure that the Reserve Strength Ratio (RSR) is not overly estimated hence giving a false impression of the value. This study is performed in order to quantify the WID load effect on producing the new revised RSR. Finally, a parametric study on the probability of failure (POF) of the platform will be performed. As part of the analysis, the USFOS Software (Non-linear) and wave-in-deck calculation as suggested by ISO 19902 as practice in the industry are used in order to complete the study. It is expected that the new revised RSR with the inclusion of WID load will be lower hence increases the POF of the platform. The accuracy and effectiveness of this method will assist the industry, especially operators, for the purpose of decision-making and, ore specifically, for their outlining of action items as part of their business risk management.
CitationAzman, N.U. [et al.]. The effect of wave in-deck in conventional pushover analysis. A: MARINE VII. "MARINE VII : proceedings of the VII International Conference on Computational Methods in Marine Engineering". CIMNE, 2017, p. 583-591. ISBN 978-84-946909-8-3.
URIhttp://hdl.handle.net/2117/331909
ISBN978-84-946909-8-3
Collections
Share: