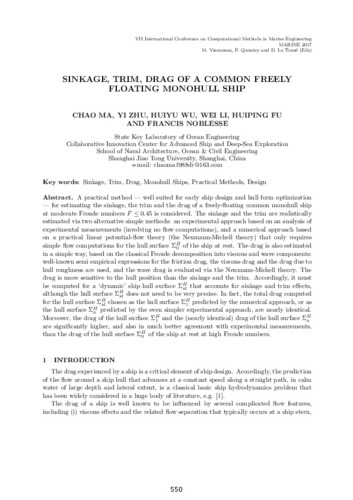 Mostrar el registro completo del ítem
Ma, Chao
Zhu, Yi
Wu, Huiyu
Li, Wei
Fu, Huiping
Noblesse, Francis
Tipo de documentoTexto en actas de congreso
EditorCIMNE
Condiciones de accesoAcceso abierto
Resumen
A practical method — well suited for early ship design and hull form optimization — for estimating the sinkage, the trim and the drag of a freely-ﬂoating common monohull ship at moderate Froude numbers F ≤ 0.45 is considered. The sinkage and the trim are realistically estimated via two alternative simple methods: an experimental approach based on an analysis of experimental measurements (involving no ﬂow computations), and a numerical approach based on a practical linear potential-ﬂow theory (the Neumann-Michell theory) that only requires simple ﬂow computations for the hull surface ΣH of the ship at rest. The drag is also estimated in a simple way, based on the classical Froude decomposition into viscous and wave components: well-known semi empirical expressions for the friction drag, the viscous drag and the drag due to hull roughness are used, and the wave drag is evaluated via the Neumann-Michell theory. The drag is more sensitive to the hull position than the sinkage and the trim. Accordingly, it must be computed for a ‘dynamic’ ship hull surface ΣH that accounts for sinkage and trim eﬀects, although the hull surface ΣH does not need to be very precise. In fact, the total drag computed for the hull surface ΣH chosen as the hull surface ΣH predicted by the numerical approach, or as st 1 the hull surface ΣH predicted by the even simpler experimental approach, are nearly identical. Moreover, the drag of the hull surface ΣH and the (nearly identical) drag of the hull surface ΣH 1 a are signiﬁcantly higher, and also in much better agreement with experimental measurements, than the drag of the hull surface ΣH
CitaciónMa, C. [et al.]. Sinkage, trim, drag of a common freely floating monohull ship. A: MARINE VII. "MARINE VII : proceedings of the VII International Conference on Computational Methods in Marine Engineering". CIMNE, 2017, p. 550-561. ISBN 978-84-946909-8-3.
URIhttp://hdl.handle.net/2117/331904
ISBN978-84-946909-8-3
Colecciones
Comparte: