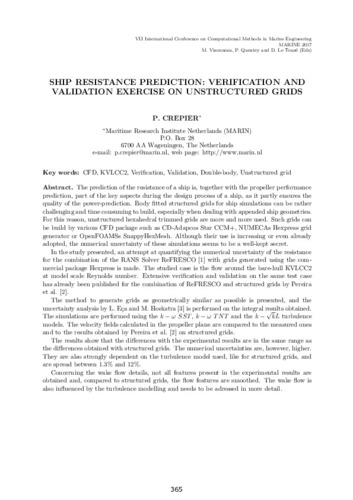 Show full item record
Crepier, P.
Document typeConference report
PublisherCIMNE
Rights accessOpen Access
Abstract
The prediction of the resistance of a ship is, together with the propeller performance prediction, part of the key aspects during the design process of a ship, as it partly ensures the quality of the power-prediction. Body fitted structured grids for ship simulations can be rather challenging and time consuming to build, especially when dealing with appended ship geometries. For this reason, unstructured hexahedral trimmed grids are more and more used. Such grids can be build by various CFD package such as CD-Adapcos Star CCM+, NUMECAs Hexpress grid generator or OpenFOAMSs SnappyHexMesh. Although their use is increasing or even already adopted, the numerical uncertainty of these simulations seems to be a well-kept secret. In the study presented, an attempt at quantifying the numerical uncertainty of the resistance for the combination of the RANS Solver ReFRESCO [1] with grids generated using the com- mercial package Hexpress is made. The studied case is the flow around the bare-hull KVLCC2 at model scale Reynolds number. Extensive verification and validation on the same test case has already been published for the combination of ReFRESCO and structured grids by Pereira et al. [2]. The method to generate grids as geometrically similar as possible is presented, and the uncertainty analysis by L. Ec¸a and M. Hoekstra [3] is performed on the integral r√esults obtained. The simulations are performed using the k − ω SST , k − ω TNT and the k − kL turbulence models. The velocity fields calculated in the propeller plane are compared to the measured ones and to the results obtained by Pereira et al. [2] on structured grids. The results show that the differences with the experimental results are in the same range as the differences obtained with structured grids. The numerical uncertainties are, however, higher. They are also strongly dependent on the turbulence model used, like for structured grids, and are spread between 1.3% and 12%. Concerning the wake flow details, not all features present in the experimental results are obtained and, compared to structured grids, the flow features are smoothed. The wake flow is also influenced by the turbulence modelling and needs to be adressed in more detail.
CitationCrepier, P. Ship resistance prediction: verification and validation exercise on unstructured grids. A: MARINE VII. "MARINE VII : proceedings of the VII International Conference on Computational Methods in Marine Engineering". CIMNE, 2017, p. 365-376. ISBN 978-84-946909-8-3.
URIhttp://hdl.handle.net/2117/331841
ISBN978-84-946909-8-3
Collections
Share: